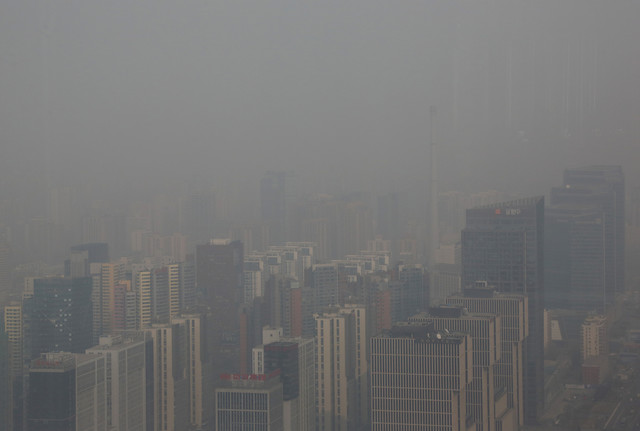 As bad air chokes Chinese cities, some expatriates are starting to leave families in their home countries, the latest sign of pollution’s rising cost to the more than half a million foreigners working in China and the multinationals seeking to retain them.

As a thick smog hung over Beijing last year, Stephanie Giambruno and her husband decided it was time for her and their two girls to return to the U.S.

Giambruno’s husband stayed back in China for his job as general manager of a global technology company. He now skypes with the family twice a day and lives with “constant jet lag” as he travels to Florida once a month to see them, she says.

While it’s hard to be apart, Giambruno says Beijing’s record air pollution left them no choice. She saw friends’ children develop asthma. Their own daughters, at age 6 and 21 months, were often forced to remain indoors.

“It’s not a way to live, to keep your baby inside with an air filter running,” she said.

As bad air chokes Chinese cities, some expatriates are starting to leave families in their home countries, the latest sign of pollution’s rising cost to the more than half-a-million foreigners working in China and the multinationals seeking to retain them. Smog in Beijing was worse than government standards most days last year, and environment ministry statistics show that 71 of 74 Chinese cities failed to meet air-quality standards.The World Health Organization said in March that air pollution contributed to 7 million deaths worldwide in 2012 — with 40 percent of those coming from the region dominated by China under the WHO’s classification system. Outdoor air pollution can cause lung cancer, a WHO agency said last year, ranking it as a carcinogen for the first time.

“We are seeing some companies reverting to 1980s and 1990s hardship packages for executive-level candidates in cities that are hard hit with pollution,” said Angie Eagan, managing director for China at recruitment firm MRIC, in an e-mail. “These packages are shaped around executives leaving their families in their home country and receiving an allowance for frequent home trips.”

Japan’s Panasonic Corp. is considering increasing a living allowance for overseas workers in China by an undisclosed amount based on environmental factors, including air pollution.

Some companies remain reluctant to add to the 5 percent to 10 percent premium they already pay to foreign employees in China, preferring to compensate them for pollution through perks such as more time off, paid trips to get away or covering the cost of insulating homes from bad air, said Fred Schlomann, managing director at human resources advisory firm AIRINC.

A third of European Union Chamber of Commerce companies in China said air pollution has added to human-resource costs as expats make demands such as better health care, pay or air filters, according to Ioana Kraft, general manager of the chamber’s Shanghai chapter.

Two-thirds identify air quality as the top challenge in attracting foreign talent. About 48 percent of respondents to a survey in 2014 by the American Chamber of Commerce for Beijing and Northeastern China said they had difficulties recruiting or retaining senior executives in China due to the pollution.

James McGregor, Greater China chairman of consultancy APCO, is moving to Shanghai in May after being in Beijing for 25 years and says his wife spends more time in Minnesota now, partly due to the pollution. To provide a clean work place, his firm installed air filters every 25 feet (7.6 meters) in their Beijing office, about a dozen devices for 30 staff members. Even so, employees need more medical leave than 18 months ago.

“There are a lot of sick days, and sometimes our office in Beijing sounds like tuberculosis wards,” McGregor, 60, said. “People in our office are complaining they don’t feel good, they don’t have energy.”

Levels of PM2.5, the tiny particles posing the greatest risk to human health, were stuck at hazardous levels for a week this year in Beijing and peaked at 35 times the WHO’s recommended limit in 2013. McGregor’s firm is able to retain staff because it mostly hires locally. Even so, he’s hearing from some clients that it’s getting harder draw new talent.

“We’re starting to see families don’t come,” McGregor said. “In some cases, people are coming without their families and they are cutting a deal to go home more often.”

R. Shane McNamara, an American executive who runs a 15-person interior design and construction company in China with his wife, says she is mulling moving her home base to Hong Kong due to the pollution. His wife, who is Chinese, has cut back on work travel because of the bad air, he said.

While McNamara says he would stay back on the mainland for the business, he has his own health concerns. At his annual health check up at the Mayo Clinic in the U.S., the doctor told him that “absolutely with that kind of pollution his health would be impacted.”

“Talented people have actually talked to me, and they’ve changed their decision to settle in China because of the air pollution,” WHO Director-General Margaret Chan said in a March interview with Bloomberg TV. “I think Chinese authorities understand this and they know what’s going on.”

Simon Gleave, Beijing-based partner in charge of KPMG’s Asia-Pacific Financial Services Practice, has spent $4,000 for an air-quality monitor, $15,000 for air filters around the house and has an indoor virtual-reality biking system for days when the air is too bad for him to cycle outside.

“If my daughter develops any health effects though, we would leave immediately,” said Gleave, who has lived in Beijing for more than a decade.

Pollution is making it hard for Nestle SA to draw both foreign and Chinese talent to Beijing, said Greater China Chairman Roland Decorvet.

Chinese Premier Li Keqiang has called pollution a major problem and said the government will declare war on smog by removing high-emission cars from the road and closing coal-fired furnaces.

Companies from Nestle to Japan’s Sony Corp. are handing out masks to employees in China. Some are lining their offices with air filters, or hiring experts to coach executives on battling smog. Qoros Auto Co., a joint venture between an Israeli company and China’s Chery Automobile Co., said it spent about 150,000 yuan ($24,000) for purifiers at its offices and 9,750 yuan on masks for employees.

Chris Buckley, a distributor of the Blueair brand of purifiers in Beijing, says corporate demand for air purifiers has doubled over the past year. Company orders could be in the range of $100,000 to fit out a two-floor office, while mid-to upper-level corporate executives can get allowances of about 15,000 yuan to 20,000 yuan to offset costs of their home purifiers, he said.

Gordon Peters, a doctor who spent more than 30 years in the U.S. Air Force and is now the Beijing-based North Asia medical director for risk advisory firm International SOS, says more corporates are hiring for seminars on protecting themselves from air pollution.

He lectures on checking pollution apps before leaving the house, which face masks to wear (N95 as it keeps out 95 percent of pollutants), the importance of air purifiers and how to seal windows and doors.

While pollution is seen as a hindrance, companies are still able to attract expats because deep knowledge of the China market is becoming crucial to career and business advancement.

Robert Parkinson from the U.K, who owns a 40-person executive search firm in Beijing, just spent more than $6,000 on two purifiers for his office. While he acknowledges the pressures from pollution, he doesn’t see it as a reason to leave because China offers advantages such as career experience, cultural exposure and good expat benefits, he said. “You have to take China as a whole meal, it’s part of the experience,” he said.

Giambruno, who moved with her girls to Florida, is grateful for the clean air they now have. While the distance and global commute are a tough cost to her and her husband, “that’s where his job is right now, and he’s got a great job and works for a great company,” she said, declining to comment on his compensation or specifics of his job.

Even as Giambruno recalls things she loved about Beijing, where she worked as a freelance television producer, she also remembers outings canceled as pollution spiked and smog so thick one January day that you could almost touch it. Now, she appreciates Florida’s blue skies.

“Everytime I walk outside with the girls, I say ‘breathe in,’ because it’s the most amazing smell — fresh air.”