– US Prepares To Provide A Billion To Ukraine As Detroit Plans Mass Water Shutoffs Over $260 Million (ZeroHedge, March 24, 2014):

Moments ago the CBO released its estimate of what S. 2124, aka “Support for the Sovereignty, Integrity, Democracy, and Economic Stability of Ukraine Act of 2014“, better known as the “Payment of Overdue Gazprom Invoices Act” – here is the verdict: “CBO estimates that enacting the bill would decrease direct spending by $373 million over the 2014-2024 period. S. 2124 would achieve that decrease mostly by rescinding funds that were provided as an emergency requirement. Certain sanctions, if enacted, would affect revenues, but CBO estimates that those effects would not be significant. Pay-as-you-go procedures apply because enacting the legislation would affect direct spending and revenues. CBO estimates that the statutory pay-as-you-go effects of S. 2124 (which, by law, do not including the effect of rescinding funds provided under the emergency designation) would be to increase the deficit by $320 million over the 2014-2024 period.” Of course, the total amount authorized is substantially higher at $1.3 billion, and will be met through various loan guarnatees, and other US-backed promises, which the CBO is assuming right now, will not result in outlays (they will). 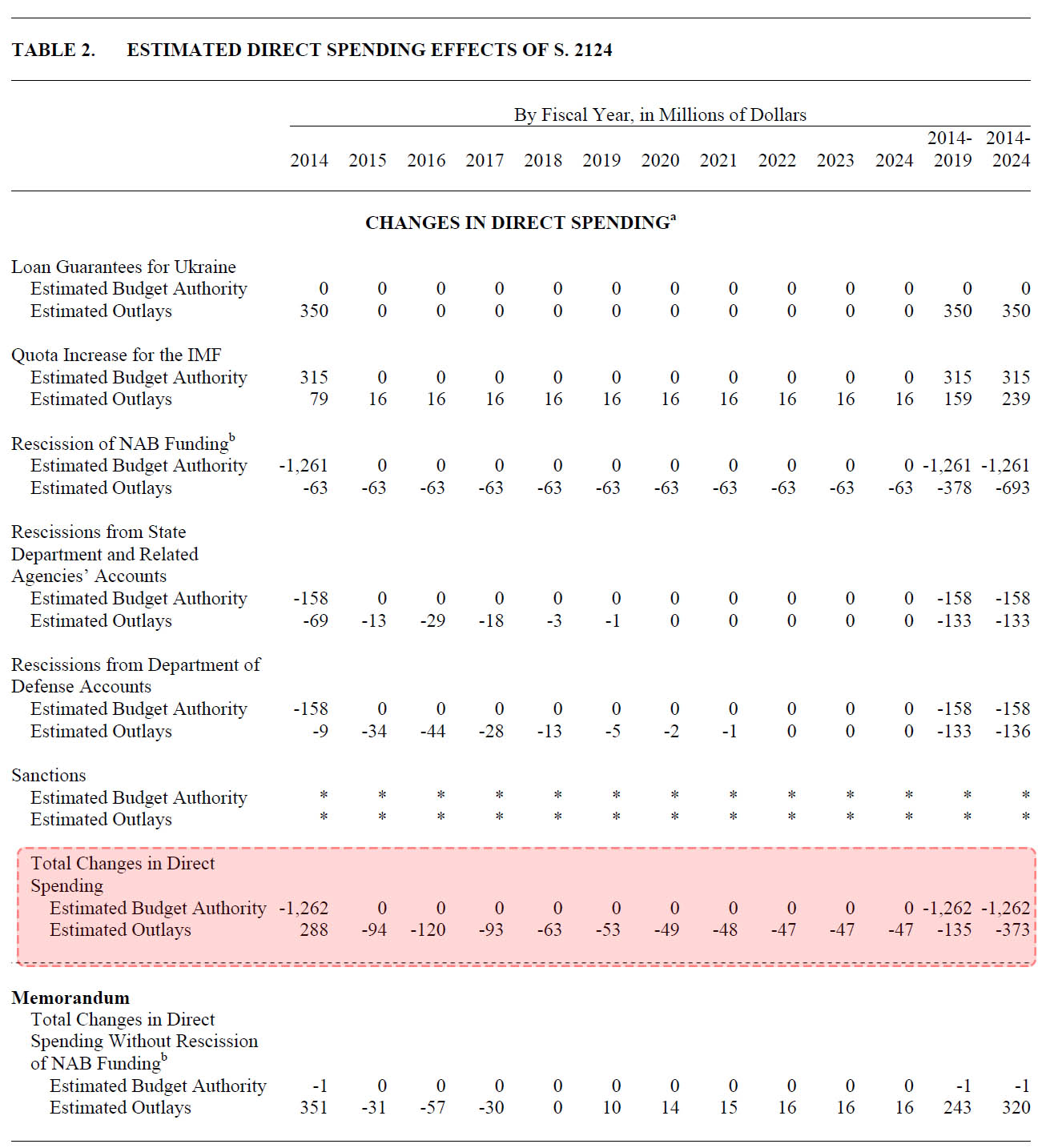 Either way, one thing is certain: in order to enforce the fading Pax Americana in the Ukraine, and to keep the funding to the otherwise insolvent Ukraine flowing, which as everyone knows will be first and foremost used to pay Russia’s Gazprom, the US is about to send lots of money abroad. As in, not in the US.

So when it comes to priorities, whom does Putin have to thank for the billions in Western funds he is about to receive? Maybe he can start in Detroit, where the local utility is planning mass water shutoffs over $260M in delinquent bills.

In other words, while the US is enforcing some odd international law, according to which a democratic vote is not credible but a violent coup is, US citizens are about to have no drinking water over a paltry $260 million.

The Detroit Water and Sewerage Department has a message for Detroit residents and companies more than 60 days late on their water bills: We’re coming for you. With more than half of the city’s customers behind on payments, the department is gearing up for an aggressive campaign to shut off service to 1,500-3,000 delinquent accounts weekly, said Darryl Latimer, the department’s deputy director.

Including businesses, schools and commercial buildings, there are 323,900 Detroit water and sewerage accounts; 164,938 were overdue for a total of $175 million as of March 6. Residential accounts total 296,115; 154,229 were delinquent for a total of $91.7 million. The department halts cutoffs through the winter because of complications associated with freezing temperatures, such as damaged pipes. But this spring, a new contractor has been hired to target those who are more than two months behind or who owe more than $150 — twice the average monthly bill of $75.

The department says it’s now ready to “catch up” with cutoffs halted because of the unusually harsh winter weather. DWSD is looking to show there are consequences associated with not paying water bills, Latimer said.

“Not everyone is in the situation where they can’t afford to pay,” he said. “It’s just that the utility bill is the last bill people choose to pay because there isn’t any threat of being out of service.”

People pay up more when they see the department out cutting off water to neighbors, and the statistics bear that out, officials said. In July, for example, before contractors started on the shutoffs, the department cut off 1,566 customers. That month, it collected $149,000 in water bills. Extra contractors started working on cutoffs last summer. Attheir peak in October — before cold weather caused a halt to the disconnects — 3,700 cutoffs occurred. The department collected more than $350,000 in overdue bills that month. That number of cutoffs translated to more than double for warm weather months compared to last year.

“We’re trying to shift the behavioral payment patterns of our customer base right now,” said Constance Williams-Levye, DWSD commercial operations specialist. “And so aggressively we’ll have a team of contractors coming in, in addition to our field teams.” Up to 20 additional contractor crews are expected to be employed working on the cutoffs, DWSD officials said.

The department bills monthly and sends out notices when bills are overdue. When an account is more than 60 days late, a notice goes out saying service could be cut, Latimer said.

Residents don’t necessarily have to move out but Latimer said there were instances, in the case of households with children, where the department of social services will come in and say the kids will be removed from the home if water is not restored.

“Usually folks will then come in and make some kind of arrangement,” Latimer said.

While we respect the DWSD’s “behavioral” experiment at making Americans accountable and taking responsibility for their action, such as paying for services rendered, it is far too late – the entire fabric of US society would tear apart, with disastrous and deadly consequences, if such an approach was taken at the wholesale level. Confused why? Just look at the $17.5 trillion in public obligations the US government is on the hook for, and which it will never repay, aka the “Minsky Moment” with the only footnote that for now the US is the world’s reserve currency, so the Fed can always print more $ and monetize even more debt. Sadly, this always ends in tears.

In the meantime, since everyone in the US is merely living from can kicking to another can kicking, one wonders: wouldn’t the $373 million in funds destined to pay off Putin’s oligarch buddies not be better used to pay overdue DWSD bills, which would then allow several tens of thousands of Detroit residents to have running water for a few more months?

Not that we advocate either course of action, but we do wonder: just who sets capital allocation responsibilities at the White House. Because last time we checked, Russian billionaire oligarchs don’t even vote in the US.