Venezuela’s exchange rate is a Gordian Knot of rules and regulations meant to baffle onlookers with bullshit and, we suspect, hide the hyperinflation from prying eyes just a little longer.Today’s launch of SICAD II, a new currency market which allows the free-market to bid for USD (in Bolivars), appears to be an effort to provide liquidity to a black-market for dollars. SICAD II priced at 55 Bolivars today – an 88% devaluation from the official rate of 6.29 (and another auction-based rate SICAD I – applicable to some firms – of 10.8). 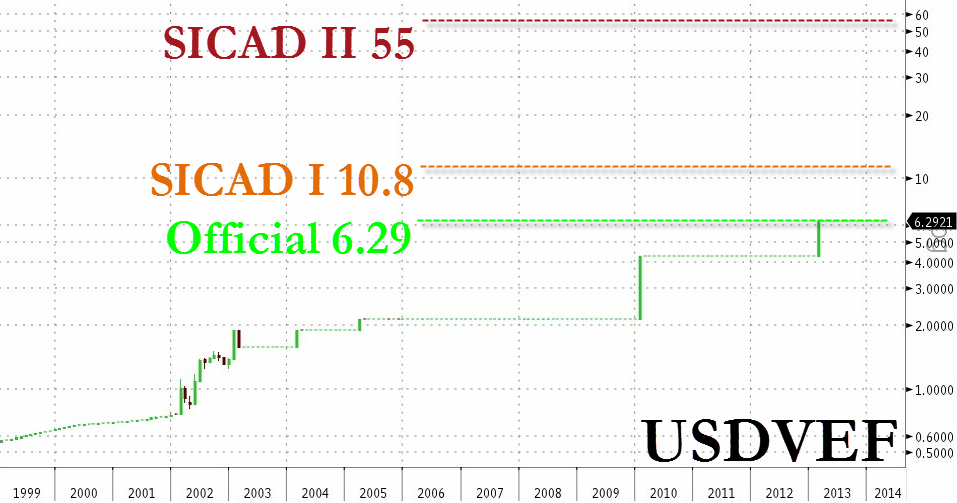 This new SICAD II rate will replace SICAD I as the official tourist rate.

Confused? You should be – the bottom line is that Maduro and his cronies continue to suppress the reality of a hyperinflating currency as student marches grow ever more popular and outspoken.

The positive ‘spin’ is that SICAD II has lowered the black market rate but simply due to the additional liquidity and transparency that the platform provides – an 88% devaluation is nothing to be too excited about!!

“It is going to cover 7, 8 percent of real (dollar) demands, seeking equilibrium as regards the flow of foreign currency necessary for the functioning of the economy,” Maduro said in a speech on Friday.

Sicad 2 essentially revives a previous system, known locally as the “permuta” or “swap” market, which Chavez shuttered in 2010 after accusing speculators of manipulating it.

Opposition politicians have long criticized the government’s currency controls. Still, they are lambasting Maduro for what they call a “stealth devaluation” via the new system.

“Today will be ‘black Monday’. Sicad 2 is another devaluation for our currency,” Tweeted opposition leader Henrique Capriles. “Nicolas has also finished off the bolivar. Another blow to the poor.”

Venezuela’s annual inflation rate, currently at more than 56 percent, is the highest in the Americas.

“This is a devaluation any way you look at this,” Tamara Herrera, chief economist at financial research firm Sintesis Financiera, said by phone. “The government is trying to bring down the black market rate with this new market, with the consensus that the dollar should be trading for about 50 bolivars.”