Something hilarious, and at the same time pathetic, happened earlier today: at precisely 9 am the US Treasury released its delayed Treasury International Capital data (which was supposed to be released yesterday but was delayed because it snowed) which disclosed all the latest foreign Treasury holdings for the month of January. Among the key numbers tracked and disclosed, was that China’s official holdings increased from $1.270 trillion to $1.284 trillion, that Japan holdings declined by a tiny $0.2 billion, that UK holdings increased by $7.8 billion to $171 billion, and that holdings of Caribbean Banking Centers, aka hedge funds, declined by $16.7 billion. Here is Reuters with the full data summary (save it before this article is pulled).

So why is it hilarious and pathetic? Because just three short hours later, the Treasury – that organization that has billions of dollars at its budgetary disposal to collate, analyze and disseminate accurate and error-free data – admitted that all the previously reported data was in effect made up!

Of course, it didn’t phrase it as such. Instead, what TIC did was release an entire set of January numbers shortly after it had released the “old” numbers, which differed by a small amount but differed across the board – in other words, not a small typo here and there: a wholesale data fudging exercise gone horribly wrong. For example:

That this glaring confirmation that all TIC data is made up on the fly, without any real backing, and merely goalseeked is disturbing enough. For what it’s worth, the latest TIC data is here. Feel free to peruse it before it is revised again

However, what was perhaps more disturbing than even that was the revelation that as of January, the US has a brand new third largest holder of US Treasurys, one which in the past two months has added over $100 billion in US Treasury paper, bringing its total from $201 billion in November, to $257 billion in December, to a whopping $310 billion at January 31. 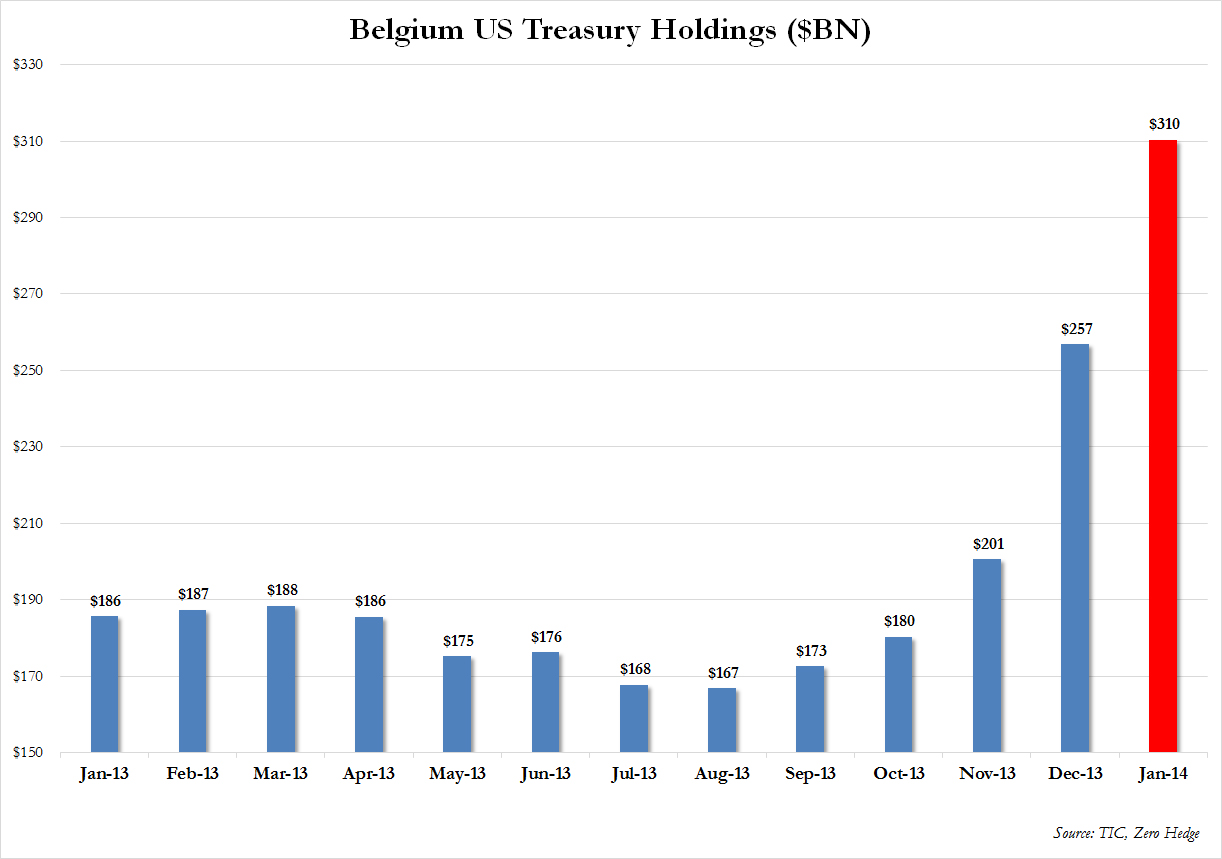 The same Belgium which at the end of 2013 had a GDP of just over €100 billion, or a little over one-third what its alleged UST holdings are.

And somehow the Treasury expects us to believe that tiny Belgium – the center of the doomed Eurozone which is all too busy running debt ponzi scheme of its own – bought in two months nearly as much US Treasurys as its entire GDP?

Apparently yes. However we are not that naive.

So our question is: just who is Belgium being used as a front for?

Recall that for years, the “UK” line item on TIC data was simply offshore accounts transaction on behalf of China. Of course, since China hasn’t added any net US paper holdings in the past year, the UK, and China, are both irrelevant in the grand scheme of things.

But not Belgium. Because with Russia (or someone else) rumored to have sold or otherwise reallocated $100 billion in US Treasurys in March away from the Fed, we wouldn’t be surprised if the Belgium total holdings somehow soared to over $400 billion when the March data is revealed some time in May. Courtesy of the excel goalseeking function of course.

Needless to say, this all ignores the initially confirmed fact that all the data presented above is made up gibberish, goalseeked by a bored intern at the Treasury, and whose work got zero error-proofing before its released to the entire world earlier today.

So… just what is going on with this most critical of data sets – official foreign holdings of US paper, and how long before an Edward Snowden emerges from the depths of the US Treasury building and reveals that behind all the data manipulation and unaudited figures was none other than the Fed, whose holdings, far greater than represented, are all that matter, and everything else is merely one grand, theatrical plug?

3 thoughts on “Which Country Bought In 2 Months Nearly As Much US Treasurys As Its Entire GDP And Is Now TheThird Largest Foreign Holder Of US Treasurys?”