General Motors is in trouble. On the heels of a 1.3 million car recall over fault ignition switches (that allegedly caused 12 deaths and could have been fixed with a $1 part), the bailed-out car maker has announced it will take a $300 million charge in Q1 to cover costs associated with this and 3 new recalls covering an additional 1.5 million cars. As Reuters reports, unsold vehicles will be placed on a stop-delivery until development of a solution has been completed. Why is this such a problem? Because GM’s channel-stuffed dealer inventory is already at all-time record highs as the entire industry projected the sales to continue ad infinitum and inventory-to-sales surged to near-record highs.

The auto maker recalled 1.18 million sport-utility vehicles with model years dating back as far as 2008 over seat air bag issues. The air bags may not deploy because of a wiring problem. Separately, the auto maker also is recalling 63,900 of a Cadillac model and 303,000 vans.

The announcement comes as GM begins the process of offering repairs to 1.3 million vehicle owners in the U.S. who are affected by a faulty ignition switch recall GM announced in February. The auto maker is in the midst of answering lawmakers and federal authorities over why it took GM nearly a decade to initiate that recall. The switches have been linked to 12 deaths.

On Friday, the Detroit automaker was hit with what appeared to be the first lawsuit related to the ignition-switch recall, as customers claimed their vehicles lost value because of the ignition switch problems. The proposed class action was filed in a Texas federal court.

And all this as inventories surge to record highs…

This was an increase from the 780,140 in January and is the largest ever channel stuffing print yet recorded by the post-bankruptcy GM in history. 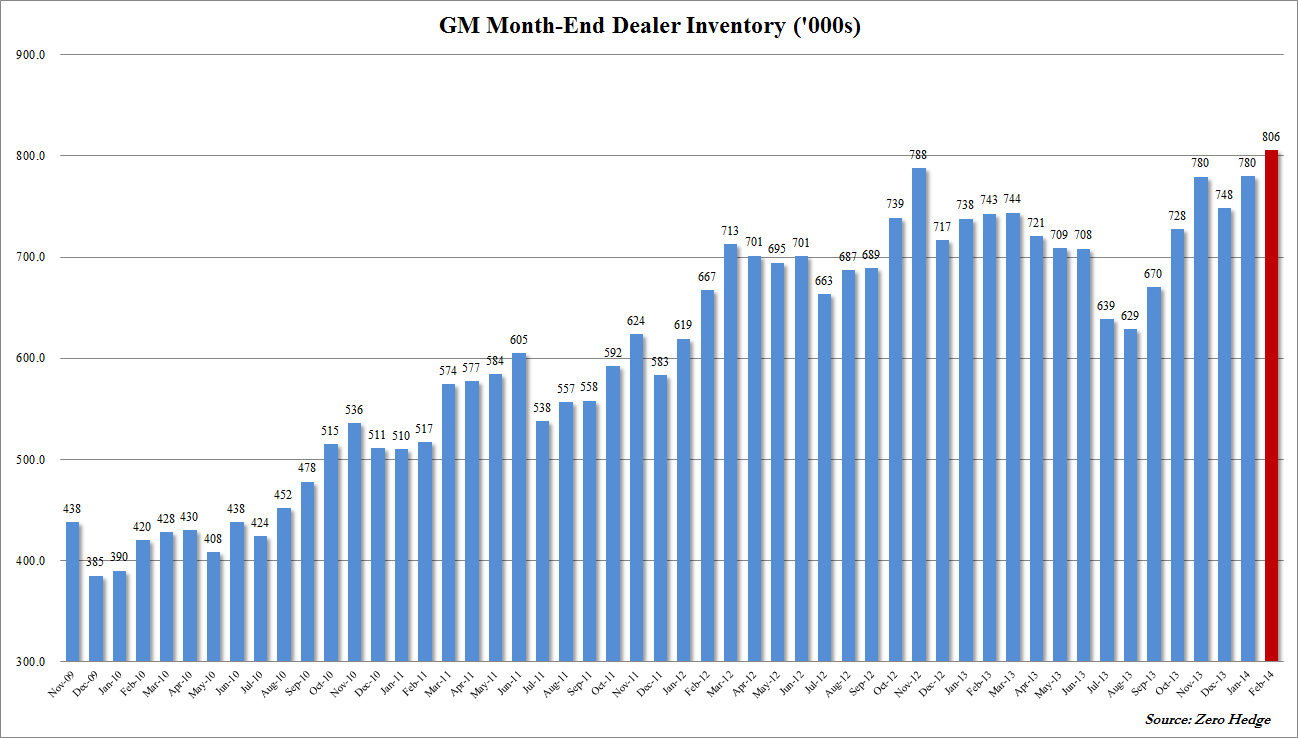 Good luck liquidating all that pent up inventory without major incentives and margin crushing price reductions for the everyone in the distribution chain.