With a day left until the critical, if widely expected, results from the Crimean referendum are revealed, it is worth recalling the main footnote in last night’s State Department travel alert for Russia: “all U.S. citizens located in or considering travel to the border region, specifically the regions bordering Ukraine in Bryansk, Kursk, Belgorod, Voronezh, and Rostov Oblasts and Krasnodar Krai, should be aware of the potential for escalation of tensions, military clashes (either accidental or intentional).” See, for the purpose of a military provocation, “accidental” will do. It is therefore not surprising to see that moments ago all major news wires blasted the following headline, quoting the Ukraine ministry of defense:

The incursion allegedly took place in the Ukraine region of Kherson, neighboring the Crimea. 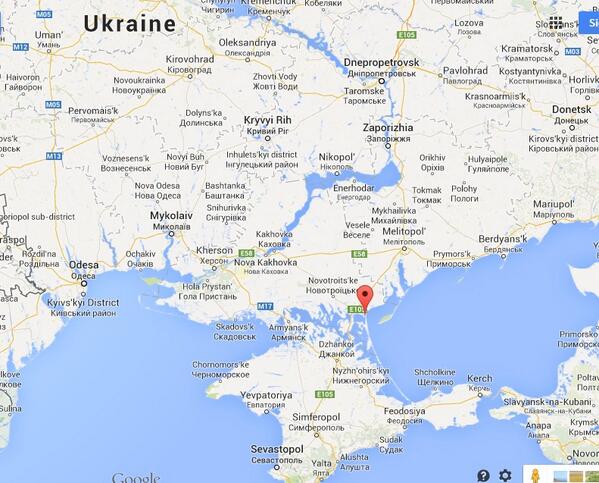 Here is the full google translated statement from the Ministry website:

Another provocation on the part of members of the Armed Forces of the Russian Federation has failed.

AFP summarizes the incident as as follows:

Ukraine accused Russia on Saturday of invading a region bordering Crimea and vowed to use “all necessary measures” to ward off an attack that came on the eve of the peninsula’s breakaway vote.

The dramatic escalation of the most serious East-West crisis since the Cold War set a tense stage for the referendum on Crimea’s secession from Ukraine in favour of Kremlin rule — a vote denounced by both the international community and Kiev.

The predominantly Russian-speaking Black Sea region of two million people was overrun by Kremlin-backed troops days after the February 22 fall in Kiev of a Moscow-backed regime and the rise of nationalist leaders who favour closer ties with the West.

President Vladimir Putin defended Moscow’s decision to flex its military muscle by arguing that ethnic Russians in Ukraine needed “protection” from violent ultranationalists who had been given free reign by the new Kiev administration.

But Russian Foreign Minister Sergei Lavrov had told Secretary of State John Kerry in London on Friday that Moscow “has no, and cannot have, any plans to invade the southeast region of Ukraine.”

The invasion reported by the Ukrainian foreign ministry was small in scale and concerned a region that lies just off the northeast coast of Crimea called the Arabat Spit.

The Ukrainian ministry said 80 Russian military personnel had seized a village on the spit called Strilkove with the support of four military helicopters and three armoured personnel carriers.

There was no immediate response to Ukraine’s announcement from Moscow but Washington’s UN representative Samantha Power called any new Russian troop movement in south Ukraine an “outrageous escalation”.

So the official line is that the Ukraine repelled a Russian “military force” in a region inside east Ukraine and out of Crimea the day after Russia’s foreign minister Lavrov said Russia has no plans to Invade Ukraine? Call us cynical, but something tells us if Russians wanted to “penetrate” east Ukraine, the would have done so without “being repelled.”

Ukraine’s military scrambled aircraft and paratroops on Saturday to repel an attempt by Russian forces to enter a long spit of land belonging to a region adjacent to Crimea, Ukraine’s defence ministry said.

“Units of Ukraine’s armed forces today…repelled an attempt by servicemen of the armed forces of the Russian Federation to enter the territory of Kherson region on Arbatskaya Strelka,” a ministry statement said. “This was repelled immediately.”

It said the Ukrainian military used aircraft, ground forces and its aeromobile battalion in the operation. The territory in question is a long spit of land running parallel to the east of Ukraine’s Crimea peninsula, now controlled by Russian forces.

But just so Russia isn’t accused of being inert, moments ago it too re-escalate the war of words and provocations, either accidental or intentional, and stated that:

Specifically, the Russian Foreign Ministry says in website statement that it will examine Ukrainians’ requests. Armed radicals are heading to eastern Ukrainian cities of Donetsk, Lugansk. Radicals provoked 2 deaths at pro-Russian rally in Kharkiv. The full statement is below:

On March 14 in Kharkov Ukraininan elements including the “Right Sector” arranged provocation against peaceful demonstrators who came to express their attitude to the so-called new government. As a result, the militants opened fire, killing two people, some were injured.

Of disturbing information that from Kharkov Donetsk and Lugansk left column with armed mercenaries “right sector” , whose leaders have announced the opening of the “Eastern Front” , and on one of the garment factories in Russia urgently sew uniforms.

paid attention Secretary of State John Kerry Russian Foreign Minister Sergey Lavrov during their meeting in London on 14 March . of While Lavrov urged John Kerry to use Washington’s influence on Kiev to curb rampant ultra- nationalists.

Russia To receive many calls asking to protect civilians. These applications will be considered.

Meanwhile in Crimea, the Russian flag is already flying above the Crimean Supreme Council: 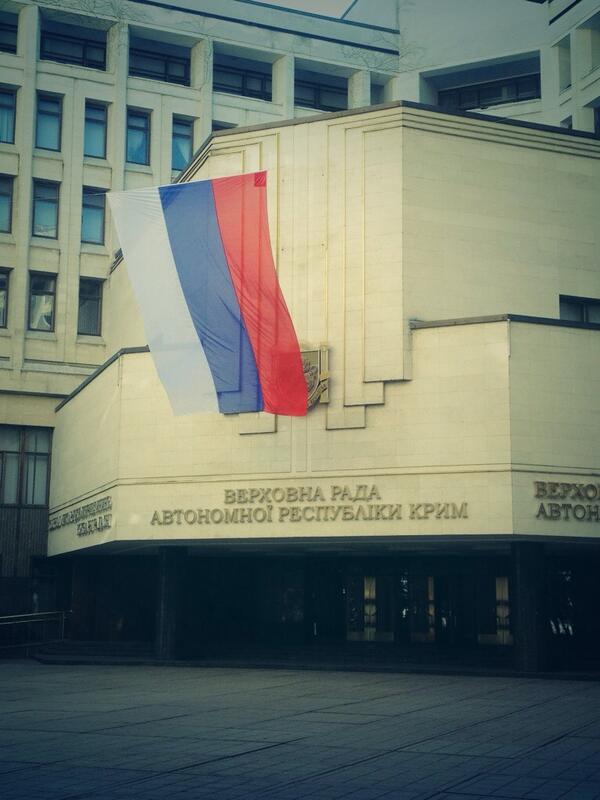 And finally, just in case things weren’t exciting enough, the US appears to finally be flexing its muscles too.

The USS Truxtun, a U.S. guided-missile destroyer, will carry out more exercises with allied ships in the Black Sea, its commander said on Saturday, in a further sign of the international response to Russia’s actions in Ukraine. Commander Andrew Biehn was briefing reporters aboard the 300-crew destroyer as it lay docked in a Bulgarian port.

If all this has happened while it is still light in Ukraine and before the Crimean referendum, we can’t wait until darkness falls on Sunday night.