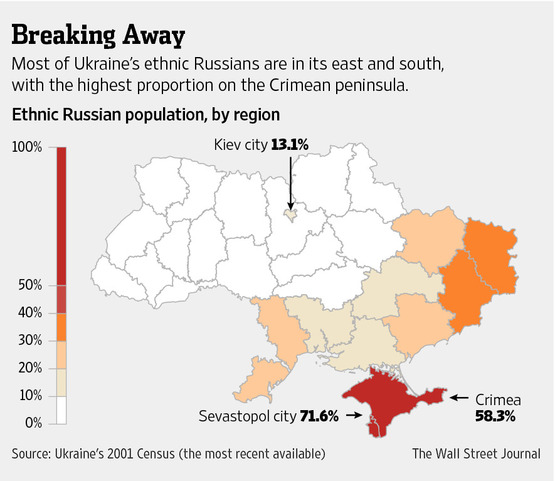 Perhaps it is time to finally admit that anyone who thought Putin’s Tuesday press conference, which the market so jubilantly assumed was a case of “blinking” and de-escalating tensions with the west, was wrong. If there is still any confusion, following yesterday’s news that Gazprom officially threatened Ukraine with cutting off its gas supplies, as well as the storming of a Ukraine base by Russian troops – luckily with no shots fired so far – then today’s developments should any remaining doubts. Moments ago AP reported that as the latest, third in a row, group of OSCE inspectors tried to enter Ukraine, they were not only barred from doing so, but warnings shots were fired to emphasize the point by pro-Russian forces.

After the officers had stopped, the armed men fired warning bursts of automatic weapons fire into the air to make other unidentified vehicles halt. No injuries were reported.

The multinational group of military officers from the Organization for Security and Cooperation in Europe was attempting to enter the embattled peninsula from the north. The armed men told them they had no authorization to enter Crimea.

The OSCE mission will likely return to the Ukrainian city of Kherson where it had spent the night, the AP reporter said.

Russia and Ukraine are locked in a tense standoff over Crimea.

OSCE tried to enter Crimea for third day, warning shots were fired as it attempted to do so today, Tatyana Baeva, OSCE spokeswoman, said by phone from Vienna.

Nobody injured in incident, OSCE mission is now back in Kherson, southern Ukraine.

Then there was this overnight escalation as reported by Ukraine’s TV5 station (of questionably credibility), via Bloomberg:

Ukraine denied entrance to 513 “extremists” from Russia during last 24 hrs, state border guard service says in another separate statement on its website

Remember, all it takes is for one stray bullet to hit a human target, on either side of the conflict, for the market to grasp just how wrong its assessment of de-escalation has been.

Elsewhere, while inspectors were trying to make their way into Ukraine – unsuccessfully – Russia announced it was considering a further freeze of U.S. military inspections under arms control treaties in retaliation to Washington’s decision to halt military cooperation with Russia, news reports said Saturday.

Russian news agencies carried a statement by an unidentified Defense Ministry official saying that Moscow sees the U.S. move as a reason to suspend U.S. inspections in Russia in line with the 2010 New START treaty on cutting U.S. and Russian nuclear arsenals and the 2011 Vienna agreement that envisages mutual inspections of Russian and NATO military facilities as part of confidence-building measures.

A Defense Ministry spokesman wouldn’t comment on the reports, which are a usual way in Russia to carry unofficial government signals.

The U.S. and the European Union have introduced sanctions over Russia in response to its move to send troops that have taken control of Ukraine’s Black Sea peninsula of Crimea.

So if the START treaty is suspended how long until its anti-proliferation clauses are scrapped completely once more, and the Cold War arms race returns once again.

Also while escalations such as these threaten to transform the new Cold War into a Hot one, the clock is ticking, and in favor of Russia, because the longer Ukraine remains without western aid, the quicker its foreign reserves will run out, and the faster the country will become a vassal state of Gazpromia. Add the ticking countdown to the March 16 Crimean referendum, which the west and Ukraine have both declared illegitimate yet have no power to stop, and suddenly one can see how Putin once again outsmarted everything the west had to throw at it. WSJ explains:

Gazprom’s demand raises the prospect that some of the aid Western powers have guaranteed could end up flowing into Moscow’s coffers to pay Ukraine’s gas bill. Virtually all of the country’s natural-gas imports come from Russia. Late last year it was granted a discount that Moscow has threatened to rescind since the fall of Mr. Yanukovych.

“This now becomes an EU/U.S. problem: Who is going to lend Ukraine the money to pay the gas bill? If so, what will be the conditions?” said Jonathan Stern, an analyst at the Oxford Energy Institute.

A spokesman for Gazprom said that the threatened cutoff wouldn’t affect supplies to Europe, which gets about a third of its gas from Russia, much of it via pipelines that run through Ukraine.

In 2009, after the Russian energy giant switched off the supply to Ukraine, Ukrainian authorities began using the supply transiting their territory that Gazprom said was destined for customers in Europe. Gazprom then cut off the flow altogether, causing shortages and price increases for end customers.

“The EU, U.S. and IMF have just about three weeks to resolve this,” Mr. Stern said.

At which point it’s game, set match Putin once more.

Finally, what certainly helped Putin is that, as expected, China took the side of Russia, not of the “free world”, in what is now a very distinct and clear axis of power the New Normal dipolar world.