Get rid of all heavy metal garbage by steam distilling your water: 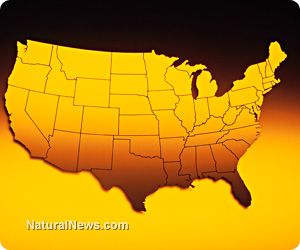 – Which parts of America are the most contaminated with arsenic? (Natural News, March 5, 2014):

Heavy metal poisoning is becoming a very serious issue in America today, as toxins in groundwater and soils, some of which have persisted there for decades, are increasingly turning up in both drinking water and the general food supply. All across the country, residues of arsenic, lead and other heavy metals have been detected in well water, crop soils and even foods marketed toward the health-conscious, including some popular rice protein brands, and yet the nation’s regulatory authorities are hardly batting an eye at this travesty.

Arsenic in particular, which the International Agency for Research on Cancer designates as a Class A human carcinogen, has been in the alternative news frequently as of late following the publishing of test results revealing the presence of potentially disturbing levels of arsenic in brown rice, brown rice protein and various other rice-based products. This revelation has already prompted many companies who use such products to begin testing their products for heavy metals, with some even promising to set new safety thresholds.

So where is the bulk of this arsenic, some of which is present in highly toxic inorganic form, hiding? A U.S. Geological Survey (USGS) report on groundwater contamination, which includes well water and springs, found that it is essentially all over the place. But particular hotspots of contamination include New Jersey, Maryland and surrounding northeastern states as well as Michigan, Idaho, California, Arizona and Washington. Other studies have also identified large swaths of the central South and Southeast where arsenic is being absorbed by rice crops.

The study, which was published in 2000, shows concerning levels of arsenic greater than 10 micrograms per liter all across central Michigan and Idaho, as well as in California’s Central Valley where the bulk of the nation’s fresh produce is grown. Other highly contaminated areas, according to a USGS map, include Nebraska, South Dakota, central Oklahoma and Illinois, and parts of Utah, Colorado and New Mexico.

Many public water supplies are also contaminated with arsenic, according to the report, and public utility filtration systems typically do not remove this toxin before delivering water to customers. This means that untold millions of people who drink unfiltered tap water are also consuming arsenic, just as they are by consuming most commercial rice.

Though the U.S. Food and Drug Administration (FDA) is on record as claiming that the short-term health effects of arsenic exposure at these levels are nonexistent, it is precisely the perpetual, cumulative toxic exposure over the longer term that is of major concern. The U.S. Centers for Disease Control and Prevention (CDC) admits that even exposure to low levels of arsenic can cause major health damage over time.

“Arsenic can cause serious effects of the neurologic, respiratory, hematologic, cardiovascular, gastrointestinal, and other systems,” adds the agency.

Countering the effects of arsenic exposure could be as simple as taking in more organic, methylating minerals like selenium and vitamin E, both of which protect the gut lining against arsenic-induced damage. Raising awareness about the presence of arsenic in water and soils is also beneficial, as food companies will be increasingly compelled to conduct heavy metal tests and establish contamination tolerances in the interest of public safety.