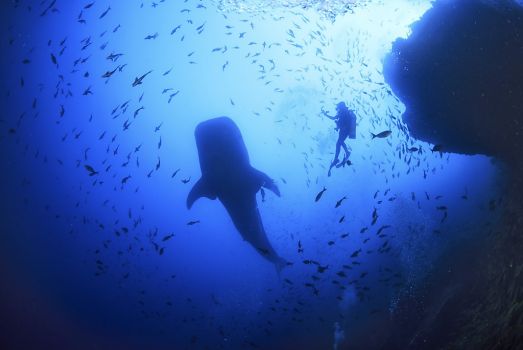 A scuba diver swims with a whale shark near Cocos Island off the coast of Costa Rica.  Sharks, bats, moths, whales, birds have all been found to used the same Magic ovements.

A magic formula of physics is propelling animals across the planet, from birds and sharks to jellyfish, according to a new discovery by researchers at Texas A&M Univeristy.

While people struggle with fixed-wing aircraft and solid propellors, animals triumph with flexible wings, fins and tails and now we know that despite their other vastly differing characteristics, they are all moving in essentially the same way.

“We found insects, birds, bats, whales, fish, dolphins, even smaller molluscs are all using the same basic mechanics,” said Marine Biologist Nathan Johnson from A&M at Galveston who did the study with colleagues from Harvard, California Institute of Technology, Indiana University and the Woods Hole Oceanographic Institute.

It shows just how advanced Mother Nature’s designs are compared to human engineering. Scientists hope their findings will help technology catch up with millions of years of evolution.

They found that the animals all flex their wing, tail or fin within a “magic range” of 30 to 60 degrees, and they all bend just 30% of whatever their relevant propulsor is.

Sounds obvious, but it’s something humans have yet to replicate by relying only on stiff wings for aircrafts and similar non-flexible propellors for boats. Thus missing out on nature’s discovery of a potentially perfect universal design.

“The best reason we can think that these similarities are there in nature is that they are the most energy efficient,” said Johnson.

The hope is that now we do know more about how animals are moving we could revolutionise our designs.

“Until now, we have been able to observe animals using flexible wings or fins but we haven’t known anything about how flexible a successful wing might need to be,” Johnson said.

Efforts to replicate jellyfish movements in robotics have already been started, according to A&M.

“The goal is to make it easier than it was before to work out how designs should function,” said Johnson. “So this research can be used in future designs.”