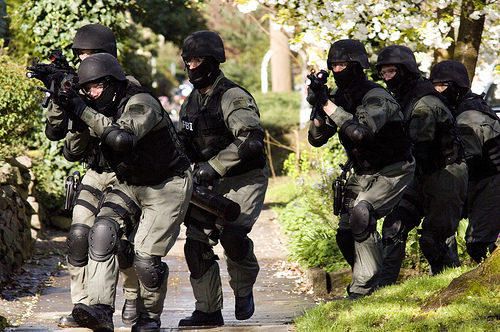 Twenty-five-year-old Ramon Hooks, back from a tour in Iraq, was shooting at targets in his backyard. He had the misfortune to accidentally fire a pellet through the window of a home for sale that a DHS agent just happened to be looking to buy at that moment. One phone call later, and two nearby schools were put on lockdown as the full force of the law descended the suburban neighborhood.

Harris County Sheriff’s Office Captain Jay Coons said the DHS agent called in an active shooter sighting, reporting that a man was armed with a “telescopically sighted high-powered rifle”.  The SWAT team descended in full riot gear, but ended up only retrieving pellets for an air rifle.

KHOU interviewed Hooks’ wife who told the local station the authorities overreacted: “‘I’m being honest: You can tell a pellet gun when you look at a pellet gun,’ she said.”