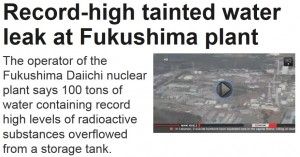 NHK, Feb. 20, 2014: Record-high tainted water leak at Fukushima plant […] the leaked water contained an extraordinarily high 230-million becquerels per liter of beta-ray emitting substances, consisting mainly of strontium 90. The level is about 7.6 million times the government’s permissible standard […] the highest level of radioactive substances detected so far in the series of tank leaks at the site. […] Officials say they managed to stop the leak […] 6 hours after the problem was first discovered. […] The Nuclear Regulation Authority has instructed TEPCO to check other tanks for possible leakages.

Kyodo, Feb. 20, 2014: More than nine hours before the leak was recognized, an alarm indicating a rise in the tank’s water surface level was issued. But workers thought the device was out of order and also could not find leaks when they patrolled the area […]

NHK, Feb. 20, 2014: [Tepco] found the water contained 240 million becquerels per liter of beta-ray emitting substances, including strontium. […] an alarm went off more than 9 hours before the leak was spotted, signaling an increase in the tank’s water level. But the tank’s water-level gauge showed a sharp drop, leading workers to believe that the alarm sounded due to the malfunction of the gauge.

AP, Feb. 20, 2014: [Tepco] said the leak involved partially treated water from early in the disaster at the plant, meaning it was more toxic than previous leaks.

Tepco: “We think that the amount that leaked out of the barrier is 100 tons […] As far as we have confirmed at this point there’s no drain nearby […] We think there’s been no leak into ocean.”