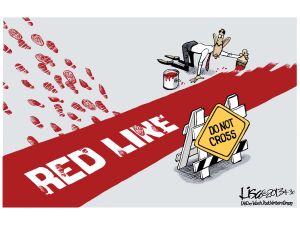 The US is adding its $0.02 to the international condemnation of the actions under way in Ukraine – desparate to re-write Victoria Nuland’s narrative of “f##k the EUR” and political manipulation. President Obama, having not learned his lesson the last time he drew a red line, has come out swinging…

Of course, it’s unclear if open military action against civilians is ‘crossing the line’ but we await Putin’s response.

More from the WSJ:

The Obama administration is considering sanctions against Ukraine, possibly in concert with European allies, saying the threat of penalties may push the government in Kiev to halt the deadly violence there.

“All of us are deeply disturbed,” Secretary of State John Kerry said during a brief appearance in Paris with his French counterpart. “We are talking about the possibility of sanctions or other steps with our friends in Europe and elsewhere in order to try to create the environment for compromise.”

Mr. Kerry and other U.S. officials didn’t detail what those sanctions might entail, but the administration in the past has held out the threat of individual sanctions, typically steps that freeze assets and limit travel.

The threat from the U.S. comes after violent clashes in Kiev this week have claimed the lives of at least 25 people and as the Obama administration and its European counterparts try to get a handle on the situation.

Ben Rhodes, a deputy National Security Adviser to President Barack Obama, said the administration hopes the threat of sanctions will quell some of the violence. “We have made it clear we would consider taking action against individuals who are responsible for acts of violence within Ukraine,” he said while traveling with Mr. Obama to Mexico. Mr. Obama is headed to Mexico, among other reasons, to discuss trade.

1 thought on “President Obama Warns Ukraine Against ‘Crossing The Line’”