Update: the market has indeed noticed:

The events in the Ukraine continue to deteriorate. Moments ago Lawmakers in Ukraine’s Lviv region, declared independence after backers evicted appointed governor overnight. Lviv’s parliament formed executive committee with department heads in Governor Oleh Salo’s administration that will take over functions of regional government, Oksana Dmetryv, a spokeswoman for Speaker Petro Kolodiy, said today by phone from Lviv. Protesters also seized headquarters of security services in Lviv, a region of 2.5 million people bordering Poland. Elsewhere, there were reports of more military vehicles crossing through Kiev: if there are any more Molotov Cocktail video follow ups we will be sure to capture them.

Still, to expect president Yanukovich (or Putin) to just sit there and let the country be torn apart by secessionists is naive. As Reuters reportrs, Yanukovich accused pro-European opposition leaders on Wednesday of trying to seize power by force after at least 26 people died in the worst violence since the former Soviet republic gained independence. European Union leaders said they were urgently preparing targeted sanctions against those responsible for a crackdown on protesters who have been occupying central Kiev for almost three months since Yanukovich spurned a far-reaching trade deal with the EU and accepted a $15-billion Russian bailout.

Russian President Vladimir Putin’s spokesman insisted the Kremlin was sticking to a policy of not intervening in Ukraine, although his point man has called for action to crush the protests. The Kremlin said Putin and Yanukovich spoke by telephone overnight, calling the events an attempted coup. Moscow announced the resumption of stalled aid to Kiev on Monday with a $2-million cash injection hours before the crackdown began.

So far, however, the implicit Russian backing of the Ukraine as is is not doing much as both the Ukraine Dollar short-bonds due June 2014 have fallen more than 2 points to a record low of 94.25 according to Tradeweb, while the Russian Ruble has just tumbled to its lowest levels against the dollar since 2009. 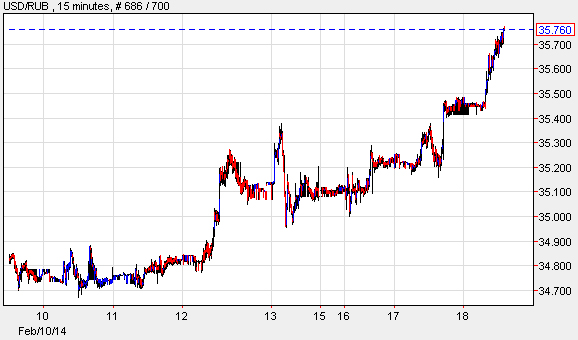 The market is finally starting to notice, and realize that nothing in the Ukraine is contained, and the consequences form a prolonged civil war would be dire for everyone involved. Which, as is the case in every proxy war, just happens to be everyone.