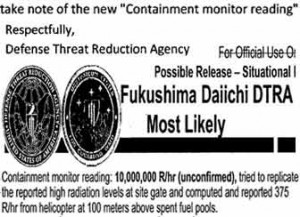 The Asia-Pacific Journal, Feb. 17, 2014: A U.S. government nuclear expert who was directly involved in the U.S. government’s radiation assessment of this situation said: “At 100 meters away it (the helicopter) was reading 4 sieverts per hour. That is an astronomical number and it told me, what that number means to me, a trained person, is there is no water on the reactor cores and they are just melting down, there is nothing containing the release of radioactivity. It is an unmitigated, unshielded number.” –Confidential communication, Sept. 17, 2012

See also: NHK: 3.75 sieverts per hour was detected above Reactor 3 by helicopter