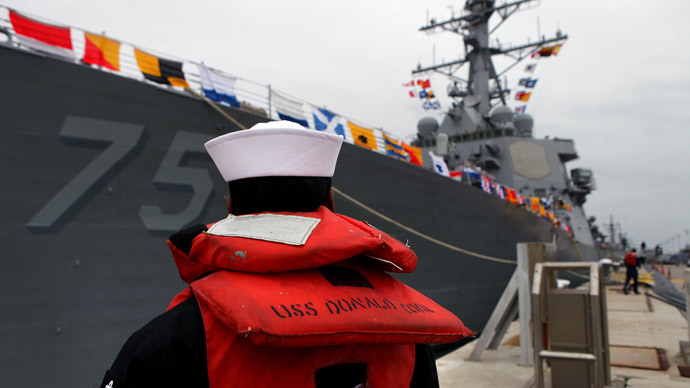 A sailor stands as the USS Donald Cook lays at dock in the southern port of Rota on February 11, 2014.(AFP Photo / Gogo Lobato )

Washington’s explanation that its strengthening missile shield in Europe is being built to guard against the Iranian nuclear threat is no more believable than it was 10 years ago.

Despite Russia’s recent efforts to broker a peaceful resolution of the Syrian chemical weapons crisis, as well as its good offices in helping resolve the Iranian nuclear conflict with Washington, the Obama administration is moving ahead with its highly provocative nuclear Ballistic Missile ‘Defense’ (BMD) deployments around Russia. What we are not being told by Western politicians is the fact that this action, far from peaceful, brings the world closer than ever to nuclear war by miscalculation.

On February 11, the first of four US advanced destroyers arrived in Rota, Spain. They will form a key part of the US-controlled ballistic missile “shield.” The shield is being sold as a protection for Europe against a possible Iranian nuclear missile attack. The four ships, all of which are planned to be in place over the coming two years, carry advanced sensor capabilities and interceptor missiles which can detect and shoot down ballistic missiles, according to NATO in Brussels.

The USS Donald Cook, a guided-missile destroyer of the United States Navy, equipped with the high-tech Aegis combat ballistic missile-defense system, docked in the southern port of Rota. Rota, nominally commanded by a Spanish admiral, is fully US-funded. It is the largest American military community in Spain, housing US Navy and US Marine Corps personnel. It will be permanently based there, according to NATO Secretary General Anders Fogh Rasmussen.

Fogh Rasmussen, who apparently understands little about nuclear strategy, told the press, “The arrival of the USS Donald Cook marks a step forward for NATO, for European security, and for transatlantic cooperation.” At the November 2010 Lisbon NATO summit, member governments agreed that NATO will develop a missile defense capability to “protect all NATO European populations and territory…Full capability is foreseen for the first half of the next decade.”

Washington continues to insist that the US BMD deployment across Europe targets possible Iranian missile attacks on Europe. The reality, as Moscow has declared again and again since 2001, when the Bush administration first announced the plan, is to target the only nuclear arsenal on Earth capable of countering a US nuclear attack, namely, Russia’s.

Indeed, BMD was top on the agenda of Defense Secretary Don Rumsfeld and George W. Bush from the very first days of the administration in 2001. Six months before the shocking events of September 11, 2001, President Bush delivered a deliberately deceptive speech on why the world needed US BMD systems. The president insisted back then, almost 13 years ago, that the purpose of his commitment to build a US missile shield was not aimed at Russia: “Today’s Russia is not our enemy” Bush said. Instead, he insisted, the BMD system was needed only against “terrorists,” against “rogue” nations like Iraq, Iran or North Korea.

In fact, as military experts from Moscow to Beijing to Berlin were quick to point out, no “terrorists” or small rogue state had any such nuclear missile delivery capability. Nor do they have today, according to US intelligence estimates.

Why then is Washington spending tens of billions if not hundreds of billions of taxpayer dollars developing its BMD system?

The details of official US military policy reports demonstrated, beyond doubt, that it had been the deliberate and unflinching policy of Washington since the collapse of the Soviet Union to systematically and relentlessly — throughout the administrations of four US Presidents — to pursue nuclear primacy (unilateral assured destruction) and the capacity for absolute, global military dominance, what the Pentagon called Full Spectrum Dominance.

In a 2006 interview with London’s Financial Times, then US Ambassador to NATO, former Cheney advisor Victoria Nuland— the same person today disgraced by a video of her phone discussion with US Ukraine Ambassador Pyatt on changing the Kiev government (“Fuck the EU”) — declared that the US wanted a “globally deployable military force” that would operate everywhere – from Africa to the Middle East and beyond—“all across our planet.”

Nuland then declared that it would include Japan and Australia as well as the NATO nations. She added, “It’s a totally different animal.” She was referring to BMD plans of Rumsfeld’s Pentagon.

As nuclear strategy experts warned at that time, more than eight years ago, deployment of even a minimal missile defense, under the Pentagon’s then-new CONPLAN 8022, would give the US what the military called, “Escalation Dominance”—the ability to win a war at any level of violence, including nuclear war.

As the authors of a seminal Foreign Affairs article back in April 2006 noted: “Washington’s continued refusal to eschew a first strike and the country’s development of a limited missile-defense capability take on a new, and possibly more menacing, look… A nuclear war-fighting capability remains a key component of the United States’ military doctrine and nuclear primacy remains a goal of the United States.”

The two authors of the Foreign Affairs piece, Lieber and Press, went on to outline the real consequences of the current escalation of BMD in Europe (and as well against China in Japan):

“. . .[T]he sort of missile defenses that the United States might plausibly deploy would be valuable primarily in an offensive context, not a defensive one—as an adjunct to a US First Strike capability, not as a stand-alone shield. If the United States launched a nuclear attack against Russia (or China), the targeted country would be left with only a tiny surviving arsenal — if any at all. At that point, even a relatively modest or inefficient missile defense system might well be enough to protect against any retaliatory strikes.”

They concluded, “Today, for the first time in almost 50 years, the United States stands on the verge of attaining nuclear primacy. It will probably soon be possible for the United States to destroy the long-range nuclear arsenals of Russia or China with a first strike. This dramatic shift in the nuclear balance of power stems from a series of improvements in the United States’ nuclear systems, the precipitous decline of Russia’s arsenal, and the glacial pace of modernization of China’s nuclear forces.”

It’s little wonder then that Russia insists that the Washington BMD deployment—and it is only Washington that controls the missiles in BMD bases—is aggressive in the extreme. To serious Russian protests, Washington responds with the even more hollow lie that the European missile “shield” is aimed at Iran.

Today, in addition to the missile-loaded USS Donald Cook in Rota, the US has BMD bases in Turkey, Bulgaria, Poland and the Czech Republic, all aimed at Russia. How stupid are the EU governments? How stupid is Washington?

Significantly, then, as Polish Defense Minister in 2007, Radek Sikorski, negotiated for the US to place its BMD missiles on Polish territory. Today as Polish Foreign Minister, Sikorski, along with US Assistant Secretary of State for European Affairs Victoria Nuland, are playing key roles in trying to sever Ukraine from Russia to further isolate Russia from the world. What they clearly fail to realize is that, even if the Russian Bear is sleeping, she is sleeping with one eye open.

The Washington neo-conservatives’ agenda to reduce Russia to a chaotic shard of a functioning nation is not the most intelligent strategy of some in Washington. But then, neo-conservative warhawks have never been renowned for their intelligence, more for their brutal war strategies in Iraq, Afghanistan, Libya, Syria and now, perhaps in a potential Third World War triggered by their insistence on BMD aimed at the Russian nuclear strike force.