– “Foreclosure Rebound Pattern”: Foreclosure Starts SUDDENLY Jump 57% in California (And Soar In Much Of The Country) (Testosterone Pit, Feb 14, 2014):

From Federal-Reserve-fueled bubble to debilitating return to reality – reality being a financial calamity – to Federal-Reserve-hyper-fueled bubble: that’s the US housing market over the last ten years. There are many places around the country, including some cities in Silicon Valley, where home values are now higher than they were at the peak of the last bubble. Of course, no one at the Fed or in government calls it “bubble.” They’re talking about the housing “recovery.”

But the excesses and speculators are back, and private equity funds and highly leveraged REITs are all over it, buying up every single-family home in sight, and now Wall-Street-engineering firms have come up with a new and improved contraption, a synthetic structured security that on its polished surface looks like that triple-A rated mortgage-backed toxic waste that helped blow up the banks. But this time, it’s different. The securities are backed by sliced and diced rental payments from single-family homes that are, hopefully, rented out [read…. Another Exquisitely Reengineered Frankenstein Housing Monster].

So wither this “recovery?”

Foreclosure filings – default notices, scheduled auctions, and bank repossessions – suddenly jumped 8% to 124,419 in January across the nation, according to RealtyTrac. Which left some people scratching their heads. A mild uptick was expected after the holidays, but 8%? And what about the polar vortices – weren’t they supposed to have slowed things down to a crawl?

OK, foreclosure filings were still down 18% from a year earlier, the 40th month in a row that they declined on an annual basis. But it was the smallest annual decline since September 2012. And the 8% jump from December was the largest such increase since May 2012. Crummy as they were, these national averages covered up some, let’s say, interesting phenomena in a number of states.

“The sharp annual increases in some states shows that many states are not completely out of the woods when it comes to cleaning up the wreckage of the housing bust,” said RealtyTrac VP Daren Blomquist. “The foreclosure rebound pattern is not only showing up in judicial states like New Jersey, where foreclosure activity reached a 40-month high in January, but also some non-judicial states like California….

Ah, my beloved state of California. Housing has been booming, and prices in coastal areas have been soaring – along with rents, to the point that mini-rebellions are breaking out. In this hyped and glorified housing market where the Big Money rules and where first-time buyers have been shoved aside unceremoniously, where foreclosure starts in 2013 had plunged 60% from 2012, and had declined year-over-year for 17 months in a row, or with the exception of five months, had declined four years in a row, well, in this wondrously recovered housing market, foreclosures starts in January suddenly jumped 57%. 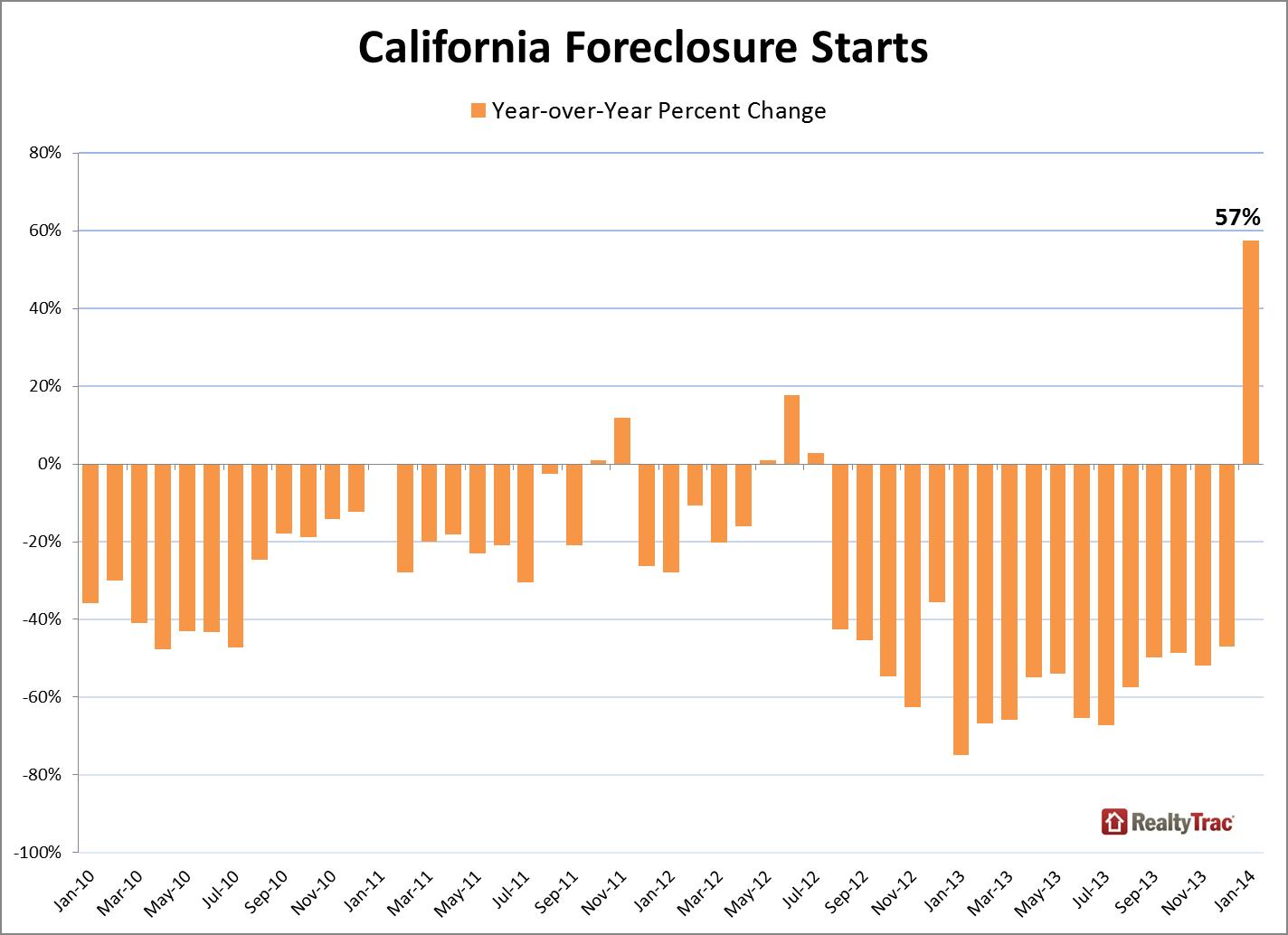 It’s not just in California. Foreclosure starts rose 10% from December to hit 57,259 properties across the country. That they on average were still down 12% from a year earlier obscured major annual increases in certain individual states, and not just in one or two, like us crazies out here in California, but in 22 states! And California with its 57% jump in foreclosure starts now suddenly seems tame: In New Jersey, they soared 79%, in Connecticut 82%, and in Maryland 126%!

The cynic in me says the sudden and dizzying jump in foreclosure starts, not only in California but in much of the country, must be some kind of data problem. Maybe RealtyTrac’s computers got hacked by some evildoer who was short the housing market or something. But when I contacted RealtyTrac to request permission to republish the chart, there was no word of a retraction, though this would have been a good opportunity, and so the numbers hold.

Maybe foreclosure starts in February and March will somehow, miraculously, plunge and return to trend. Maybe January was just a fluke. But that may be wishful thinking. Instead, it could be the indication of a turning point of sorts, like some of the other indications we’ve already observed, and maybe the strange sound that we’re hearing out there is the hot air hissing out of this whole construct, so carefully inflated by the Fed, and so assiduously taken advantage of by private equity funds and other Wall Street outfits with access to the Fed’s nearly free money.

Meanwhile, my beloved state of California, whose $2 trillion economy is the eight largest in the world ahead of Italy and Russia, has a new problem: it’s awash in cash. It’s projecting multi-billion dollar surpluses for years to come. The feeding frenzy in Sacramento is a sight to behold. Read…. California MUST Have Magnificent, Endless Bubbles in Housing, Stocks, And IPOs – Or Go Broke Again

1 thought on “RECOVERY: Foreclosure Starts SUDDENLY Jump 57% In California (And Soar In Much Of The Country)”