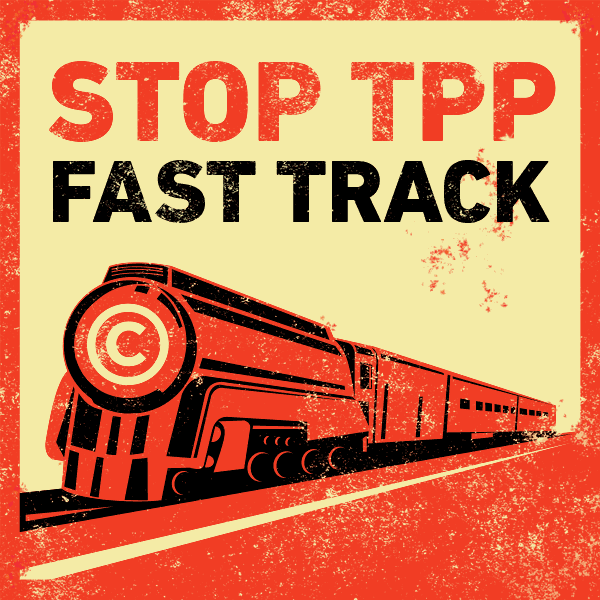 House Minority leader Nancy Pelosi firmly announced her rejection of the “Fast Track” bill at an event on Wednesday, saying it was “out of the question.” Its passage has become increasingly tenuous since Senate Majority leader Harry Reid came out against it two weeks ago.

Fast Track is a mechanism that empowers the White House with sweeping authority to sign off on trade deals like the Trans-Pacific Partnership (TPP), limiting Congress’ constitutional powers to set trade objectives, choose trading partners, and call hearings and amend all provisions. Opposition from Democrat leaders in the House and Senate is a major setback for the Fast Track bill, and likely comes as a result of public opposition from hundreds of thousands of individuals and organizations across the US.

Despite these blows, Obama and the US Trade Rep are still forging ahead to try to bring TPP closer to agreement among the 12 negotiating countries. US Trade Rep Michael Froman will meet this weekend with Japan’s trade minister, who is head of the country’s TPP negotiations, to reconcile differences on some major remaining sticking points around tariffs and auto trade. The next TPP meeting, already delayed several times, will begin on February 22 in Singapore. Then in April, President Obama is scheduled to make a trip to Asia. A White House press statement this week shows that TPP is clearly on his agenda as he visits two countries participating in the negotiations.

However, resistance continues to mount abroad. Over 80 senior legislators from seven TPP negotiating countries issued a joint letter demanding that the entire draft text of the agreement be published before it is signed, “to enable detailed scrutiny and public debate.” Vice President of Peru, Marisol Espinoza, is also a signatory to the letter.

The next few months will be interesting for the White House as it struggles to pull together support on this sprawling trade deal both at home and abroad. Senator Ron Wyden has become the new Chair of the Senate Finance Committee, where he will face pressure from the President to pass some form of Fast Track legislation to pass TPP as quickly as possible. But Wyden has been a vocal opponent to the secrecy around these trade negotiations. In 2012, he sent a letter to the US Trade Rep calling them to release detailed information about provisions in the TPP that would impact Internet freedoms. He also introduced a bill to the floor demanding the US Trade Rep give Congress members full access to the TPP text—the same access afforded to representatives of corporations like the Motion Picture Association.

Members of Congress may also introduce a different Fast Track bill, including provisions aimed at mitigating some of the major opposition to the TPP. But any version of Fast Track that facilitates secret trade agreements enables one-sided copyright laws and threatens users rights is unacceptable. Digital policies must be created democratically and transparently.

If you’re in the US: use this tool to contact your lawmakers, call your representatives, and help us keep the pressure on Congress to oppose Fast Track.