Having rallied yesterday and totally ignored the fact that Letta’s 10-month-old government was about to collapse, Italian equity and sovereign bond markets are falling this morning by their most in two weeks. The main bone of contention for Renzi-Letta fight is jobs and growth – there is none of either – and while Prime Minister Letta assures that the Italian economy grew in Q4 (GDP data to be released tomorrow) for the first time in 10 quarters, as Bloomberg’s Niraj Shah notes, real GDP is still smaller than it was in 2000. Letta has just canceled his UK visit (planned for 2/24) and did not take part in the Democratic Party meeting with a Renzi friend saying “[Letta] will resign.”

Premier Enrico Letta said Thursday that he would not attend a meeting of his centre-left Democratic Party (PD) that has been called to decide whether it should continue backing his coalition government. New PD leader Matteo Renzi may call on the party to pull its support for Letta so he can take over as premier. Letta said he would not go to the meeting so that his party could “decide with serenity”. 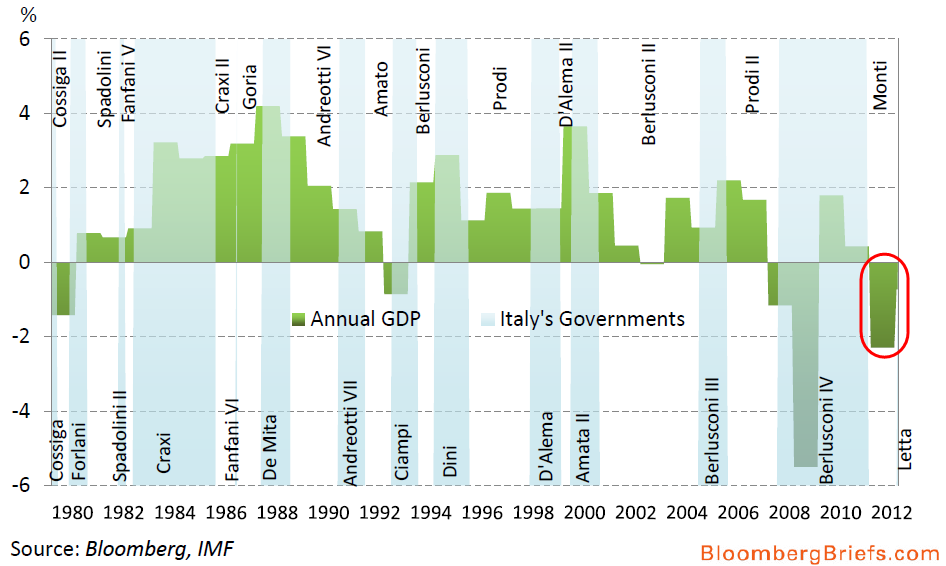 However, with unemployment at record levels, we suspect few will care about some manufactured, goodwill-enhanced GDP print. Italians are, of course, used to the farce that is politics – there have been 64 government since 1945.