Here is what protects you perfectly from any currency devaluation:

With only $24.5 billion left in FX reserves after valiantly defending major capital outflows since the Fed’s Taper announcement, the Kazakhstan central bank has devalued the currency (Tenge) by 19% – its largest adjustment since 2009. At 185 KZT to the USD, this is the weakest the currency has ever been as the central bank cites weakness in the Russian Ruble and “speculation” against its currency as drivers of the outflows (which will be “exhausted” by this devaluation according to the bank). The new level will improve the country’s competitiveness (they are potassium heavy) but one wonders whether, unless Yellen folds whether it will help the outflows at all. The Kazakhstan stock index is up 12% on the news… 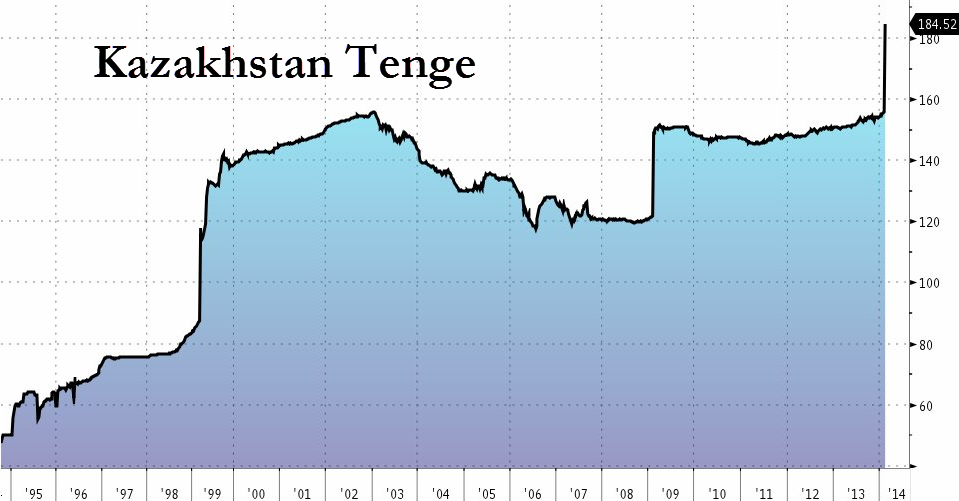 The tenge, introduced in 1993 after the breakup of the Soviet Union two years earlier, weakened the most against the dollar last month since July. Kazakhstan devalued its currency by 21 percent in February 2009, as the biggest energy producer in central Asia spent billions of dollars to support the economy and bail out its biggest lenders following the collapse of Lehman Brothers Holdings Inc.

“The devaluation was a surprise for many people, considering the central bank’s assurances that the exchange rate is stable,” Damir Seisebayev, director of the analytical department at ?? Private Asset Management in Almaty, said by e-mail. “But you have to be realistic. What is the tenge? It’s the ruble rate multiplied by five. This is a tested formula.”

The Kazakhstan Stock Exchange gained 12 percent after the announcement, data on the bourse’s website show.

So it must be great news, right? Just as Venezuelan stock holders…

“The move reflects a combination of factors, including the steady deterioration in the current-account position, worries over the impact of weak growth in Russia and the ruble’s managed depreciation,” Tim Ash, chief emerging-markets economist at Standard Bank Group Plc. in London, said in a note today.

1 thought on “Kazakhstan Devalues Currency To Weakest On Record”