We thought today’s newsflow and “market action” ranked pretty high on the absurd surrealism scale. And then we saw this.

That’s right – you read it correct: “Blythe Masters, head of JPMorgan Chase & Co.’s commodities division, is joining an advisory committee of the U.S. Commodity Futures Trading Commission, said Steve Adamske, a spokesman for the regulator. Masters, 44, was invited by acting Chairman Mark Wetjen to sit on a global markets committee at the Washington-based regulator of futures and swaps, according to a person with knowledge of the matter. Masters is scheduled to participate in a CFTC meeting on Feb. 12 to discuss cross-border guidance on rules, the person said.”

Ok – ignore, if you will, all alegations about Blythe Masters “interventions” in the precious metals markets.

But don’t ignore Blythe’s CNBC interview in which the soon to be former JPMorganite said, days before the London Whale fiasco was exposed and so were JPM’s attempts to corner the bond market, that JPM has “offsetting positions. We have no stake in whether prices rise or decline. Rather we’re running a flat or relatively flat matched book” – a statement that was a bold faced lie, and was followed up with “what is commonly out there is that JPMorgan is manipulating the metals market. It’s not part of our business model. it would be wrong and we don’t do it.”

No, Blythe had much greater manipulative ambitions, namely becoming the next Enron, which we learned after than the FERC fined JPMorgan – and the group ran by Blythe Masters – for manipulating electricity prices in California and other states.

Fast forward to today when we learn that this certified commodity market manipulator just got a job with none other than the head commodity regulators in the US?

In other words, you too can get a job at the CFTC if only you can answer yes to the following two questions (h/t Manal):

We could ask what Elizabeth Warren would think about this hilarious rotating door out of the most punished for its legal transgressions bank – with about $25 billion in legal fees, expenses and settlement charges – the same Warren who earlier today was parading with pandering populism at the Senate hearing, as a result of which nothing would change…

… but we won’t. Because as we noted: nothing will ever change. Actually correction – now it will be Blythe Masters on top of the one regulators that is supposed to enforce a fair, honest and efficient commodities market.

It’s almost as if they are explicitly telling the handful of people who still care about this entire charade a resounding “fuck you.” 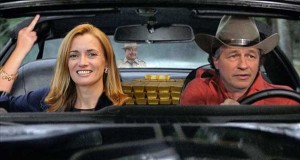