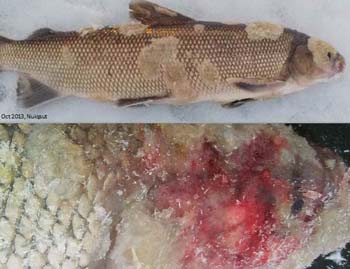 Local Environmental Observers (LEO) Network, Updated Dec. 12, 2013 (emphasis added): Unusual growth observed in salmon tissue — Hydaburg, Alaska, August 12, 2013 (salmon) We have found strange growths in the flesh or meat of salmon. We were fishing for cohos (silver salmon) at the mouth of the Hydaburg River with line and reel. I caught about thirty fish. Most were fine but eight […] were filled up inside with strange growths that were either white or pink in color. On the outside the fish looked fine. The growths looked kind of like individual little salmon eggs, and about the same size. Other people were seeing the same kind of growths in their fish as well.  We have only seen this in the cohos and not with the other fish (pink salmon, dog salmon, steel head or trout).  We are seeing many coho salmon with these growths, and we are concerned about the health of the fish and the safety of the food. Brian Holter Jr, LEO […] says: this observation has been forwarded to the Fish Pathology Lab at the Alaska Department of Fish and Game. According to lab staff, they may be able to determine the condition of the fish with a photograph. Lab staff are available for consultation.

Local Environmental Observers (LEO) Network, Nov 21, 2013: Skin illness on white fish raise concerns — Nuiqsut, Alaska, October 13, 2013 (fish) For the past week we been catching sick fish on Nigliq Channel and today upstream from Nigliq Channel to the Colville River. In all the years I’ve been fishing I never caught any fish like this. Caught 3 more sick fish with same markings and this time one had some kind of growth coming out from its mouth on October 14, 2013. Most people in our community eat this fish. […] [Ted Meyers at ADF&G Fish Pathology Lab] said that these fish showed signs of earlier net injuries. At this time of year the fish are spawning and they are usually stressed and more vulnerable to illness. The marks seen in the photo and on the fish are largely net lesions from fish who escaped from the net and then developed a fungus in the skin lesions. The greenish color in the lesions can be from algae and dirt that can get caught in the wound. The insides of these fish were healthy and normal. The damaged flesh from fish should be removed and discarded but the healthy looking meat is fine […]

Alaska Dispatch, Jan. 21, 2014: Bleak king salmon run predicted for Alaska’s world-famous Kenai River this summer — A catastrophic return of late-run king salmon to the Kenai River is being forecast for this summer by the Alaska Department of Fish and Game. […] the report notes “this run would be the lowest in the 29 years of record” […]

1 thought on “Alaska: Many Salmon With Strange Growths Inside, Concerns About Health And Safety – ‘… Never Caught Any Like This’ (Photo)”