Earlier, we debunked an alarmist Forbes story about halted cash transfer by PBOC decree, which was erroneous along various lines all explained previously, not in the least that the actual announcement had first appeared some three weeks ago. And despite the kneejerk reaction of some of our more fatalist readers and not to mention the general public, the reality is that China has more than enough real problems (Trust Equals Gold being at the forefront) and certainly does not need to add imaginary, made up ones, conceived only with the intention of generating conflated ad revenues through click-baiting headlines. Which is why we commend Forbes for, better late than never, pulling the story even without providing an explanation of how this story appeared in the first place. Because where the article once was, there is only a 4-0-Forbes now: 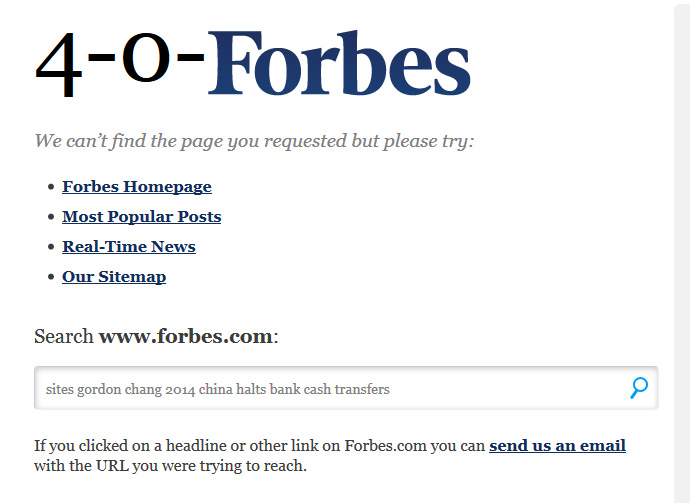 Perhaps it is not too late for Forbes to salvage some credibility.

One person whose credibility, however, was already so deep down the drain that tonight’s incident barely made a dent, was Dennis Gartman, who made an impromptu appearance on CNBC China (gotta keep collecting those $200/appearance checks: after all someone’s gotta pay the bills) and extolled the virtues of the now 404’ed Forbes article, preaching fire and brimstone to the 5 or so people who may have been interested in his ramblings.

To wit: “The news out of China, that they have suspended remittances of Renminbi, is even more important than the news out of the emerging markets last week….”

And so on, spinning an entire market impact thesis based on a fake story. Oh well, gotta work all night to rewrite your entire Monday newsletter, Dennis.

In retrospect, had we known Gartman endorsed this story earlier, we would have known it was a fake from the beginning.

Meanwhile, the real story regarding China, the one we broke and explained on the 16th, is only gathering steam, following an official statement from the S&P’s Liao who said that there is “no legal ground for ICBC to take responsibility” adding that “a bailout could risk a shareholder lawsuit.” He observed that Trust Equals Gold acts much like a bond, and a “default would raise funding costs”, but is unlikely to trigger a liquidity shock for the entire system, and is “unlikely to undermine the whole banking system.”

Luckily, it’s not like S&P has been wrong before…