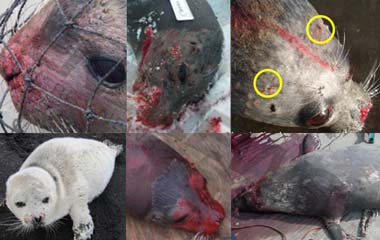 Alaska Marine Science Symposium (pdf), Jan. 20-24, 2014 (emphasis added): 2011 Fukushima Fall Out: Aerial Deposition On To Sea Ice Scenario And Wildlife Health Implications To Ice-Associated Seals (Dr. Doug Dasher, John Kelley, Gay Sheffield,  Raphaela Stimmelmayr) — On March 11, 2011 off Japan’s west coast, an earthquake-generated tsunami struck the Fukushima Daiichi nuclear power plant resulting in a major nuclear accident that included a large release of airborne radionuclides into the environment. Within five days of the accident atmospheric air masses carrying Fukushima radiation were transiting into the northern Bering and Chukchi seas. During summer 2011 it became evident to coastal communities and wildlife management agencies that there was a novel disease outbreak occurring in several species of Arctic ice-associated seals. Gross symptoms associated with the disease included lethargy, no new hair growth, and skin lesions, with the majority of the outbreak reports occurring between the Nome and Barrow region. NOAA and USFWS declared an Alaska Northern Pinnipeds Usual Mortality Event (UME) in late winter of 2011. The ongoing Alaska 2011 Northern Pinnipeds UME investigation continues to explore a mix of potential etiologies (infectious, endocrine, toxins, nutritious etc.), including radioactivity. Currently, the underlying etiology remains undetermined. We present results on gamma analysis (cesium 134 and 137) of muscle tissue from control and diseased seals, and discuss wildlife health implications from different possible routes of exposure to Fukushima fallout to ice seals. Since the Fukushima fallout period occurred during the annual sea ice cover period from Nome to Barrow, a sea ice based fallout scenario in addition to a marine food web based one is of particular relevance for the Fukushima accident. Under a proposed sea ice fallout deposition scenario, radionuclides would have been settled onto sea ice. Sea ice and snow would have acted as a temporary refuge for deposited radionuclides; thus radionuclides would have only become available for migration during the melting season and would not have entered the regional food web in any appreciable manner until breakup (pulsed release). The cumulative on-ice exposure for ice seals would have occurred through external, inhalation, and non-equilibrium dietary pathwaysduring the ice-based seasonal spring haulout period for molting/pupping/breeding activities. Additionally, ice seals would have been under dietary/metabolic constraints and experiencing hormonal changes associated with reproduction and molting. 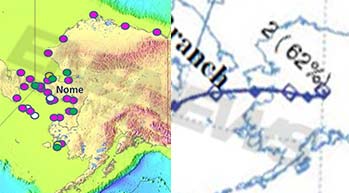 Two of the four authors will be appearing on an Alaska radio program this Tuesday January 28 to discuss radiation from Fukushima:

Radiation from Fukushima, APRN (Alaska Public Radio Network), Jan. 24, 2014: They’re having trouble sealing up the leaking nuclear power plants in Japan and they’re also having trouble disclosing what is going on there. Is this a reason to distrust Alaska seafood? […] GUESTS: Professor Doug Dasher, Environmental Oceanographer, University of Alaska Fairbanks School of Fisheries and Ocean Science — Dr. John Kelley, Professor Emeritus, University of Alaska Fairbanks, former Director, Naval Arctic Research Laboratory — Post your comment before, during or after the live broadcast (comments may be read on air). […] LIVE Broadcast: Tuesday, January 28, 2014 at 10:00 a.m. […]

See also: Researchers: Skin ulcers on Alaska wildlife after Fukushima were never observed before — Also reported in seals from Japan — We couldn’t document fallout pattern when plumes hit and animals were on the ice (AUDIO)