This is what happens when the Status Quo is incapable of reforming itself or recognizing reality: propaganda and bogus statistics are substituted for actual solutions.

The most heavily touted statistical “proofs” that the U.S. economy is “recovering” and “growing” are the unemployment rate and the stock market. Both are completely bogus. Yes, bogus, as in phony, wrong, rigged, misleading, carefully crafted propaganda.

Earlier this month, we showed that In Terms of Real Stuff, the Dow’s “New High” Is Pure Illusion (January 6, 2014). Another way of adjusting the nominal new high to reality is to adjust it for inflation, as measured by the producer price index (PPI) or the consumer price index (CPI). If we adjust for inflation, we find that the recent new highs are considerably lower than the stock market peak reached in 2000: 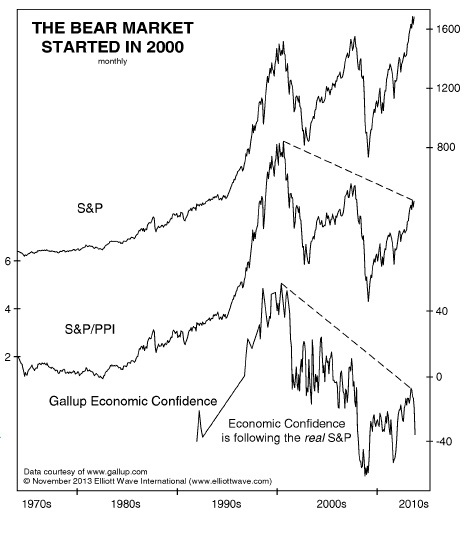 Simply put, “new highs” in the stock market are statistical sleight-of-hand. By any practical, real-world measure, the SPX is worth significantly less adjusted dollars in 2014 compared to the real peak in 2000.

Gamed in such a fashion, an economy in a full-blown depression can sport an unemployment rate of near-zero. That’s precisely where we’re heading. Here are the three charts that show this. I’ve drawn in trendlines so the future decline in the unemployment rate is easily predictable. 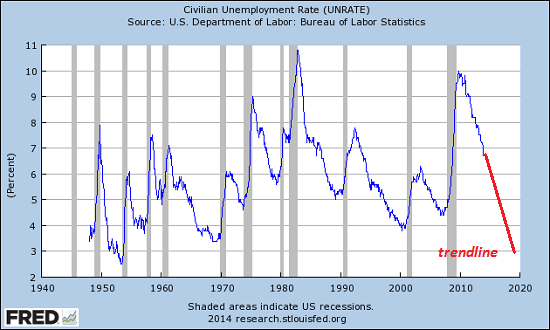 The participation rate (percentage of the population in the labor force) will soon be at levels last seen when the typical household only had one employed adult: 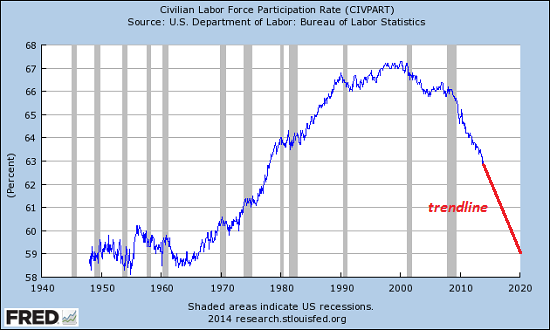 Those not in the labor force will soon equal the number of people with full-time jobs (around 115 million): 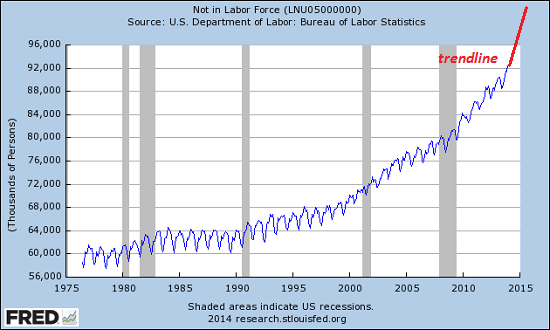 This is what happens when the Status Quo is incapable of reforming itself or recognizing reality: propaganda and bogus statistics are substituted for actual solutions.