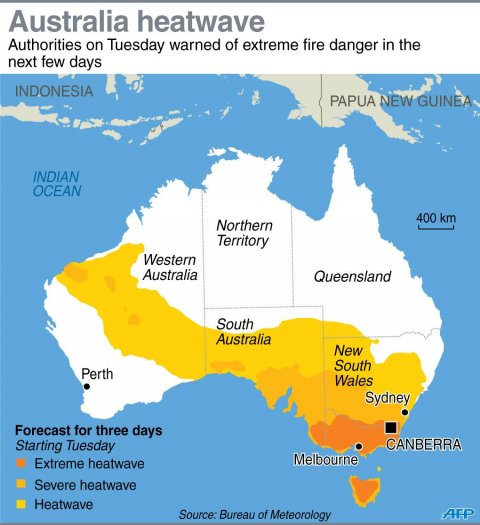 Australian authorities warned Tuesday of some of the worst fire danger since a 2009 inferno which killed 173 people, with most of the continent’s southeast sweltering through a major heatwave.

“These next four days promise to be amongst the most significant that we have faced in Victoria since Black Saturday,” said acting state premier Peter Ryan.

Tens of thousands of firefighters were on standby, and 1,290 brigades were in a “state of high preparedness”, he added, with the peak danger day expected on Friday when very strong winds are forecast.

The flames raced out of control and triggered brief emergency alerts before water-bombing aircraft and engine teams managed to bring them under control.

There were also blazes alight in neighbouring South Australia state.

Victoria and South Australia are preparing this week for what forecasters are describing as “severe to extreme heatwave conditions”, with successive days of temperatures above 40 degrees Celsius (104 F) expected.

A similar heatwave struck before the 2009 fires, Australia’s worst natural disaster of the modern era in terms of casualties. An estimated 374 people died during the preceding heatwave, with another 173 fatalities in the firestorm itself.

If the forecasts come to pass, Melbourne will endure its longest stretch of hot weather in 100 years.

Road tar was melting in southern Tasmania, with temperatures in the island state some 18 degrees above the January average, breaking several records.