Dr. Michael Parenti, Ph.D.(Yale University) political scientist, historian, author, Jan. 13, 2014: […] President Obama has been as mute about the calamity looming at Fukushima as the Japanese government itself—-and for the same reasons. First, the potential danger is stupendous and it is in the manner of leaders, when facing something that might develop into a super catastrophe, to keep the public’s mind off it. The last thing they want is to put the public into a fright and fury about their own survival […] Should Obama broach the subject of Fukushima he would leave himself open to a host of questions […] It would become apparent that he and the others have no sure answer regarding how they are going to decommission the nuclear plants […]

Al Jazeera America, Jan. 13, 2014: […] since its inception, commercial nuclear power has also provoked a kind of blood-curdling dread, and countries embraced the vision of a nuclear future to very different degrees. The 2011 catastrophe in Fukushima confirmed, once again, the nightmarish potential of nuclear power, and refigured the debate about nuclear across the globe. […] 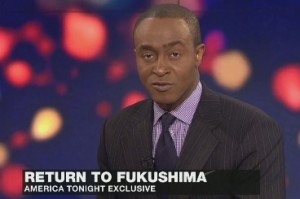 Michael Okwu, Al Jazeera correspondent back from Japan, Jan. 7, 2014 (at 2:30 in): To be clear, people are awake at night because every day, worst case scenarios are entirely conceivable at the four troubled reactors at Fukushima Daiichi. If for some reason the cooling system falters or a massive earthquake in this highly quake prone nation were to hit, deadly levels of radiation could be released into the atmosphere In Reactors 1, 2, and 3 the cooling system is completely dependent on an ad hoc warrant of pipes that travel through the melted core. Tepco says its reactors could withstand a M9.0 quake, but we spoke to plenty of people in Japan who were not willing to find out how accurate that statement is.