Half Moon Bay Review, Jan. 3, 2014 at 8:21p ET: [San Mateo] County health officials first learned of the radiation levels last week, and they sent their own inspector on Dec. 28 to Pacifica […] the county inspector measured the beach to have a radiation level of about 100 micro-REM per hour [1 microsievert per hour], or about five times the normal amount. […] Although the radiation levels were clearly higher than is typical, [San Mateo County environmental health director Dean Peterson] emphasized that it was still not unsafe for humans. […] Peterson admitted he was “befuddled” as to why radiation levels were higher than normal, but he was skeptical that the Fukushima meltdown could be the cause. He noted that many innocuous items could spike the radiation levels in an area, including red-painted disposable eating utensils. […] Peterson forwarded the matter to the U.S. Environmental Protection Agency and state Department of Public Health […] 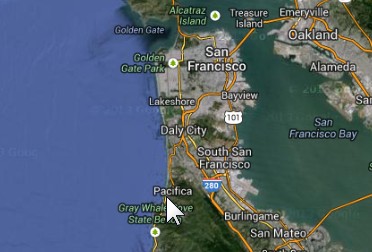 Dean Peterson, San Mateo County environmental health director: “It’s not something that we feel is an immediate public health concern […] We’re not even close to the point of saying that any of this is from Fukushima. […] I honestly think the end result of this is that it’s just higher levels of background radiation.”

The Half Moon Bay Review article provides details on the YouTube video that spurred local officials into action: An amateur video of a Geiger counter showing high radiation levels at a Coastside beach has drawn the attention of local, state and federal public health officials. […] the short video has galvanized public concerns that radioactive material could be landing on the local coastline from Japan as a result of the 2011 meltdown of the Fukushima Daiichi reactors. […] First posted last week on YouTube, the seven-minute video shows the meter of a Geiger counter as an off-camera man measures different spots on the beach south of Pillar Point Harbor. The gadget’s alarm begins ringing as its radiation reading ratchets up to about 150 counts per minute, or roughly five times the typical amount found in the environment. […] In a blog entry, the unidentified poster of the video noted that he has been monitoring local beaches for two years before noticing a sudden rise in radiation levels in recent days. […] In the following days other amateurs with Geiger counters began posting similar videos online. […] “We can’t comment on anybody’s media creation. We really have no way of knowing right now whether it’s valid or not,” said [state Public Health] spokeswoman Wendy Hopkins.

1 thought on “Official Detects Radiation Spike On California Beach, Now At 500% Normal Levels – ‘Befuddled’ As To Why It’s So High, Claims There’s No ‘IMMEDIATE’ Health Concern”