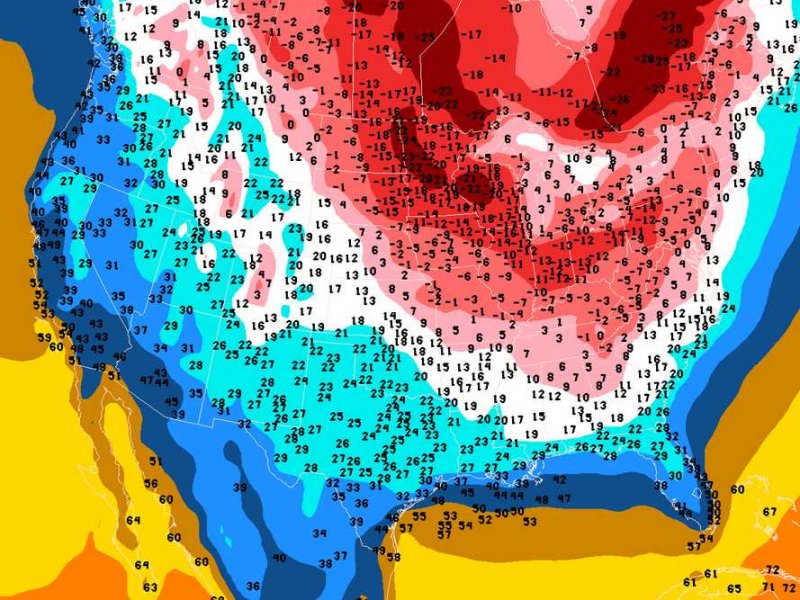 A heavy snowstorm and dangerously cold temperatures gripped the northeastern United States on Friday, dumping up to two feet of snow in some places.

Meteorologist Eric Holthaus described the ferocity of the storm system as a “weather bomb,” accompanied by a pressure drop of 26 millibars. The lower the pressure, the stronger the winds.

From the The Daily Beast:

The particularly intense nor’easter that spawned this blizzard has officially entered ‘bomb’ territory–a technical meteorological definition meaning a rapid deepening of a low pressure system by more than 24 millibars in 24 hours (also, designed to frighten little children into a lifetime of snowy terror). Our blizzard-y friend achieved this mark with room to spare, intensifying from 1012 millibars Thursday morning to 986 millibars at press time, a mere 20 hours later.

So far, that’s been enough to produce tropical storm conditions (sustained 39 mph winds or higher) just offshore New Jersey, New York, and New England for much of the overnight hours.

The winter storm that hit the Midwest and Northeast is moving into the Atlantic on Friday, but dangerously cold air is moving behind the system, the National Weather Service said.

Forecasts are calling for record-low temperatures on Tuesday morning due to a mass of cold air sweeping down from the North Pole, according to Holthaus.

Climate Central’s Andrew Freedman says that the blast of Arctic air, coming from Canada and Greenland, will drop temperatures to 20 to 30 degrees Fahrenheit below normal in huge parts of the nation. Minneapolis, Chicago, Cleveland, St. Louis, Washington, D.C., New York, and Boston will be particularly affected:

Computer model forecasts project low temperatures on Monday night in Washington to drop to near zero, and below zero in Boston and possibly New York City as well. Dayton, Ohio, is likely to see lows from 10-20°F below zero, and parts of Iowa could see temperatures into the minus 30s°F.

According the National Weather Service, the Northern Plains and Upper Midwest will experience some of the coldest temperatures with forecasted lows in the -20s across North Dakota and Minnesota and possible wind chills of -55 degrees Fahrenheit on Saturday night.

Meteorologist Ryan Maue tweeted a cool 6-day GIF of temperature anomalies across the country, starting Friday and into Wednesday.