What can one say but: “because of the recovery?” 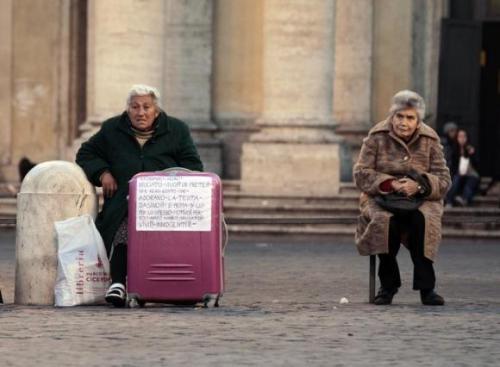 As Italy’s ISTAT reported yesterday, poverty in Italy has reached its highest level in at least 16 years “as the economic crisis has bitten, driving up unemployment and cutting wages, according to a report on social cohesion issued on Monday. Relative poverty, defined as a family of two living on a monthly income of 991 euros (847.61 pounds) or less, affected 12.7 percent of families, the highest level recorded since the current series of data began in 1997, the report by statistics agency ISTAT said.”

It was immediately unclear if this beat expectations of a 13% print, and thus was bullish for the Stalingrad and Propaganda 500.

The report, a compendium of data on issues ranging from employment to demographics, said poverty had deepened in all areas of Italy between 2011 and 2012. Relative poverty rose from 4.9 percent to 6.2 percent in the richer north and from 23.3 percent to 26.2 percent in the poorer south.

The report painted a grim picture of the impact of the country’s worst post-war recession, with joblessness at record levels, incomes squeezed and permanent, full-time employment declining. “As one of the countries most affected by the crisis, Italy registered a progressive decline in the main macroeconomic and social indicators in 2012,” Labour Minister and former ISTAT chief Enrico Giovannini said in the introduction to the report.

“Nonetheless social cohesion has held up, enabling the country to support sacrifices aimed at recovering financial stability and passing important reforms,” he said.

Well as long as “social cohesion” has held up, i.e., no civil war has broken out yet, all is well. Then again, some disagree:

The relatively optimistic tone contrasted sharply with recent comments from employers’ federation Confindustria, which warned this month that the recession had inflicted damage on the Italian economy comparable to that left by a war.

The hardships caused by unemployment and measures taken to keep straining public finances under control have fed mounting discontent, typified by a long series of occasionally violent street protests earlier this month.

Unemployment in Italy is at its highest level since at least the late 1970s with the overall jobless rate at 12.5 percent and youth unemployment as high as 41.2 percent in October, according to the latest ISTAT figures.