It’s not Spago, nor Per Se. It isn’t located on Rodeo Drive or in Columbus Circle. The restaurant with the longest waiting list, five-years to be precise, is a small, nondescript, 12-table basement located in Earlton, N.Y., named simply enough Damon Baehrel after its owner and chef. Its guests come from 48 countries and include such celebrities as Jerry Seinfeld, Martha Stewart and Barack Obama himself. However what makes Baehrel’s restaurant the most exclusive restaurant in the world is not the decor, nor the patrons, some who fly overnight from Manhattan to pay $255 for dinner (before wine and tip), nor the hype (although all the advertising is through word-of-mouth), but the food, which is all cultivated, grown, prepared, cooked and served from and on the property, and where Baehrel is literally the only employee. “I’m the chef, the waiter, the grower, the forager, the gardener, the cheesemaker, the cured-meat maker, and, as I will explain, everything comes from this 12-acre property.”

The reality is that farm-to-table dining is not exactly a revolutionary concept, although it certainly makes for a far more enjoyable eating experience. As Bloomberg reports, “even McDonald’s touts its farmers and ranchers in feel-good ads. Increasingly, though, entrepreneurial chefs are doubling down on the eat-local trend and bringing customers into their own homes (or cozy approximations thereof). At these culinary salons or underground restaurants, as they’re often called, professionally trained cooks host for-profit dinner parties in unexpected spaces. There’s Wolvesmouth in Los Angeles, where chef Craig Thornton invites patrons to come to his house and pay what they want; City Grit in Manhattan, which rotates Top Chef winners through a downtown furniture store (yes, the communal dining table is for sale); the Underground Restaurant in London; Supper Underground in Austin, Tex.; and Hush Supper Club in Washington and Chicago. The food world revolves around hype—the harder it is to get into a restaurant, the more people want to go—and so culinary tourists obsess and war over the limited space at these secret spots.”

In this world of self-contained gastronomical universes, Baehrel is the most secret:

He has no staff, unless you count his wife and a tech-savvy friend, who help him manage the reservation e-mail address posted on his website. He spends no money on marketing and doesn’t have a business manager cultivating endorsement deals. There have been no profiles of him in major food magazines nor write-ups of his restaurant in any newspapers. In spite of this, or possibly because of it, the wait time just keeps getting longer.

The chef, waiter, gorager, grower (etc), never started off as one: “He learned how to cook from his mother, an avid gardener, and also from years doing odd jobs in mountain-resort kitchens in the Northeast. “I learned bits and pieces along the way, but I never did the research, never looked in a cookbook. In my family, we just learned to do it ourselves, and the inspiration came from nature,” he says. After an injury in 1985 derailed his nascent career as a professional motocross racer, Baehrel and his wife bought their land and opened a catering business specializing in foraged food. It eventually morphed into the bistro concept in 2006 and since then has relied almost entirely on word-of-mouth buzz.”

And a lot of buzz there is: as Michael Chernow of New York’s chain of Meatball Shops says, “With [Baehrel’s] skills, it’s like he’s the Michael Jordan of culinary art.”

So just what does the Michael Jordan of cooks serve?

Baehrel has a thing for molecular gastronomy; his small bites are dehydrated, infused, and tinctured on their way from lawn to mouth. All of that work happens in a red and white-trimmed kitchen-as-barn the chef built himself. It could pass for a rustic guesthouse. He keeps the space meticulously clean, laying down plastic sheets every few days to protect the linoleum floors. On steel prep tables sits the usual restaurant gear of blenders and food processors; neatly organized shelves store hundreds of containers of carefully labeled ingredients such as powdered bracken ferns or pickled maple leaves. “It occurred to me one day—and this was really an epiphany, 25 years ago—that everything I needed was here,” Baehrel says. “And I was going to spend the rest of my life developing and exploring what was possible.”

Not surprisingly, with an unmatched work ethic, Baehrel’s concept is very lucrative. 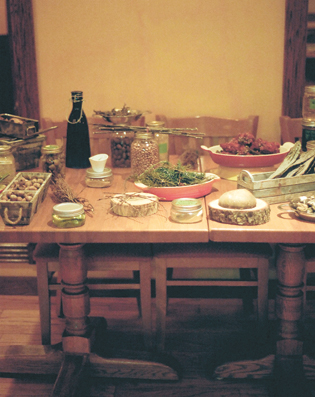 This hyperlocal, hyperunderground strategy is paying off. Baehrel won’t provide exact numbers but says he serves a few thousand guests each year and generates annual revenue of at least $750,000. By contrast, a successful restaurant in Manhattan’s crowded West Village might break the $1 million mark, though the business model is much different. Baehrel’s expenses are less predictable each season; they can include one-off big-ticket items such as a $5,000 trailer or a $10,000 hauling cart. But with no payroll or mortgage, and no food vendors except for his wine, seafood, and meat, which is from a local farm stand, he can stay both small and successful. “The biggest risk,” he says, “is that it’s just me there.”

However, what is most unique, and why Baehrel’s kudos and fame, are well-deserved, is his passion for working, cooking, that he takes no shortcuts, and that he has learned how to survive and thrive in an isolated ecosystem with zero supply-chain constraints and considerations, and with zero outside influence by the all-powerful megacorporations (although we have a nagging feeling it is only a matter of time before a major publicly-owned restaurant chain dangles a multi-million dollar check before Baehrel, acquires his 12-table basement and promptly pollutes yet another independent, clean eating concept).

“Native Harvest is more than the cuisine; it’s my way of life. It’s living off the land, and it’s fun to watch nature reveal itself,” Baehrel says. The three-bite dish has an appealingly musty mushroom taste. Sixteen dishes follow over the next five hours, some bite-size and others hearty courses of scallops, steak, and chicken. “He doesn’t use any dairy or butter in his cooking, and yet his sauces are creamy and delicious,” Chernow says. Each course is somehow improved by Baehrel’s monologue about the effort it takes to produce.

Perhaps that’s why the mainstream food world has finally started to take notice. Earlier this year, Damon Baehrel earned one of the country’s highest Zagat ratings: 29 for food and 28 for service, out of a possible 30. Baehrel also won his first James Beard nomination, as best chef in the Northeast in 2013. As it stands, the wait list for dinner stretches well into the back half of this decade. As the once-secret restaurant becomes less so, a new puzzle emerges: How does one score a table before Baehrel retires? He acknowledges that eventually he’ll have to stop taking reservations. “It’s a good problem to have.”

It’s also a good problem to have for all the minimum-wage restaurant workers of America who toil day and night at various McDonalds and Burger Kings around the country, demanding a higher wage and engaging in nearly daily strikes. Here’s a thought: take your passion for your job (if of course there is one) and do what Baehrel did – start a venture, open up a business, provide something new, original, fresh, and you too can attain the American dream. Or alternatively, keep on striking, and demanding more, more, more from the government, and from an uncaring corporatocracy, while lamenting your plight. Because if there is a lesson in Baehrel’s experience (and this most certainly is not a promotional post), is that while the US system is doing everything in its power to crush the enterpreneurial drive and to make upward mobility impossible, for those who have a real passion about their lot in life true success is still possible.

Finally, and perhaps most important assuming the future of the world is one in which critical supply chains tear apart: Baehrel’s example shows that one can lead a self-contained life of near gastronomical perfection with zero needs for 99 cent meals, and merely a few acres in which to grow and raise one’s food. All it takes, of course, is a lot of work…

For the reading challenged, here is an abbreviated 3-minute video summary of the above.

1 thought on “The Restaurant With The Five-Year Waiting List”