– The Complete And Unabridged History Of Gold Manipulation (ZeroHedge, Dec 4, 2013):

On November 1st, 1961, an agreement was reached between the central banks of the United States and seven European countries to cooperate in achieving a shared, and very clearly stated, aim.

The agreement became known as the London Gold Pool, and it had a very explicit purpose: to keep the price of gold suppressed “under control” and pegged regulated at $35/oz. through interventions in the London gold market whenever the price got to be a little… frisky.

The construct was a simple one.

The eight central banks would all chip in an amount of gold to the initial “kitty.” Then they would sell enough of the pooled gold to cap any price rises and then replace that which they had been forced to sell on any subsequent weakness.

*Statement is subject to standard terms and conditions and is not necessarily reflective of any evidence. Government entities are excluded from inclusion based on the fact that we can’t really do anything about them and anyway; they could put us out of business; and it would make things really, really bad for them. Also, bullion banks are not covered under this statement because we were told to turn a blind eye; but individual investors are, and we can categorically confirm that, to the best of our knowledge, no individuals are manipulating the precious metals markets (at this time).

But, as Grant Williams explains in this excellent and complete summary of the history of Gold price manipulation, things don’t always go as planned…

Libor, FX rates, and mortgages trades are all fiat in nature. The contracts that are exchanged have no tangible value. (Yes, technically speaking, mortgages have houses underneath them, but the houses are so far down the securitization chain as to be invisible). Such contracts can be created at the push of a button or the stroke of a pen and manipulated easily right up until the point where they can’t.

Gold is a different beast altogether.

The manipulation of the gold price takes place in a paper market — away from the physical supply of the metal itself. That metal trades on a premium to the futures contract for a very good reason: it has real, intrinsic value, unlike its paper nemesis.

If you want to manipulate the price of a paper futures contract lower, you simply sell that paper. Sell it long, sell it short, it doesn’t matter — it is a forward promise. You can always roll it over at a later date or cover it back at a profit if the price moves lower in the interim.

And of course you can do it on margin.

If the trading were actually in the metal itself, then in order to weaken the price you would have to continue to find more physical metal in order to continue selling; and, as is welldocumented, there just isn’t so much of it around: in recent years what little there is has been pouring into the sorts of places from which it doesn’t come back — not at these price levels, anyway.

The London Gold Pool had one thing in common with the rigging of the FX, Libor, and mortgage markets: it worked until it didn’t.

The London Gold Pool proved that central banks can collude cooperate to rig maintain the price of gold at what they deem manageable levels, but it also proved that at some point the pressure exerted by market forces to restore the natural order of things becomes overwhelming, and even the strongest cartels groups (whose interests happen to be aligned) — which are made up of the very institutions granted the power to create money out of thin air — can’t fight the battle any longer. 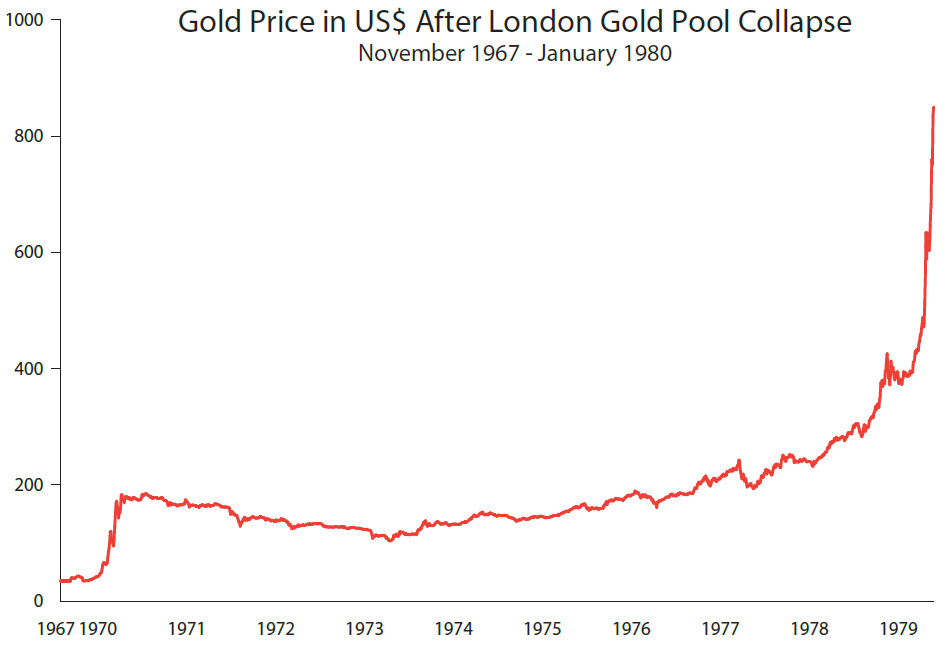 …The problem now is that currently there are almost 70 claims on every ounce of gold in the COMEX warehouse and serious doubts about the physical metal available for delivery at the LBMA. 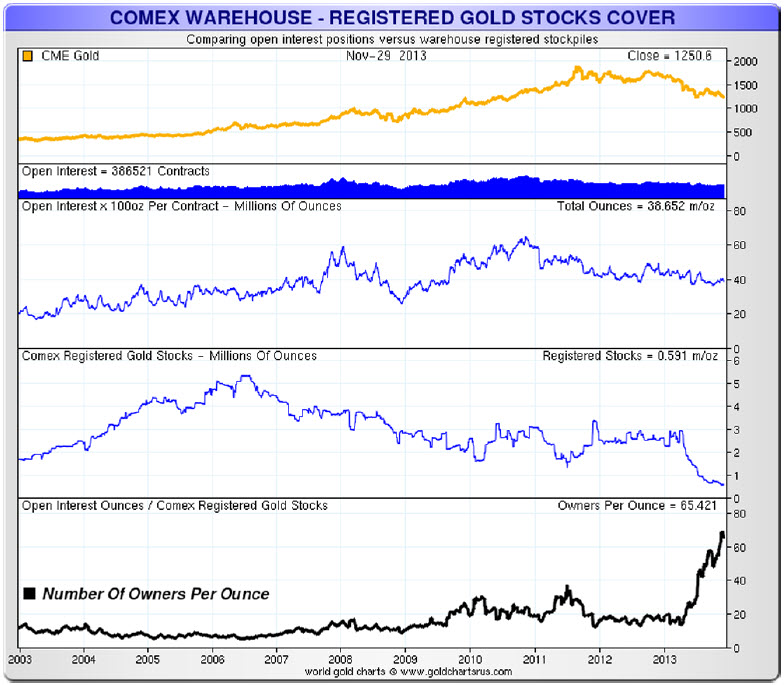 Which leads us to today…

The London Gold Pool was designed to keep the price of gold capped in an era when the world’s reserve currency had a tangible backing. In defending the price, the eight members of the Pool were forced to sell way more gold than they had initially contributed in order to keep the price from going where it desperately wanted to go — higher.

This time around, the need for the price to be capped has nothing to do with any kind of gold standard and everything to do with the defense of the fractional reserve gold lending system, about which I have written and spoken many times.

Gold is moving to ever stronger hands, and when the dam does inevitably break again, the true price will be discovered by natural market forces, free of interference.

This time, however, those chasing what little gold is available will include all those central banks that have kept their holdings “safe” in overseas vaults.

The Bundesbank has seen the writing on the wall and demanded its gold back. They were told it would take seven years before their 30 tonnes could be returned to them.

My guess is, this little scheme doesn’t have seven years left to play out.

Everybody outta the pool!

TTMYGH Twisted (by the Pool)