Associated Press: The turbine buildings at the Fukushima Dai-ichi plant are about 150 meters (500 feet) from the ocean. According to a Japan Atomic Energy Agency document, the contaminated underground water is spreading toward the sea at a rate of about 4 meters (13 feet) a month. At that rate, “the water from that area is just about to reach the coast,” if it hasn’t already, said Atsunao Marui, an underground water expert […] on a government committee studying the contaminated water problem. “We must contain the problem as quickly as possible.” 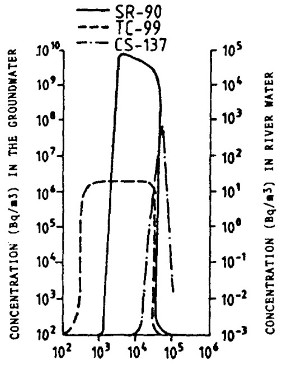 International Radiation Protection Association: “After a core meltdown accident it cannot be completely ruled out that the melt will reach, and partly penetrate, the concrete foundation. The amounts of some radionuclides leached out by the passing groundwater are estimated. The transport of dissolved radionuclides in groundwater is simulated by an analytical dispersion model […] a core meltdown accident could well cause the melt to penetrate into the reactor foundation and pass through it down to the bottom side of the foundation within five days. Even if the passing groundwater were to prevent complete melt-through, there would still be a direct contact of the groundwater with the re-solidified melt surface through fissures, cracks, etc., which could cause the fission products to be leached. […] Figure 1a shows the concentration in the groundwater and in the river water 500 m away from the reactor between 100 days and 100,000 days . The groundwater was assumed to be discharged into the river water 500 m from the reactor […] The highest radionuclide concentration of approx. 10^10 Bq/m3 [10 billion Bq/m3] is reached by Sr-90 after some 5,000 days.”

According to Figure 1a, strontium-90 levels stay near zero for the first 1,000 days, after which levels spike to dramatically and appear to remain elevated for the next 50,000 or so days. Though Fukushima is more than 3X closer to the water than the reactor in this study, it is more than 3X slower (0.133 meters/day vs. 0.5 m/d). And of course, Fukushima is dealing with three melted reactor cores, not one.

Regarding strontium-90, marine chemist Ken Buesseler from Woods Hole Oceanographic Institution said, “Our biggest concern right now is if some of the other isotopes such as strontium 90 which tend to be more mobile, get through these sediments in the ground water […] They are entering the oceans at levels that then will accumulate in seafood and will cause new health concerns.”

The study lists several ways to try and mitigate the contamination: Installing impermeable walls around the plant, pumping off the groundwater, using extraction pumps, and freezing the soil.

However, Buesseler said, “Any contamination in the groundwater would eventually flow into the ocean. That is very difficult to stop even with barriers.” The AP writes that Buesseler’s research suggests “contaminated water from the reactor-turbine areas is already leaking into the sea.”