A few days ago, in the latest escalation over the its territorial dispute with Japan regarding several islands in the East China Sea, China unveiled a so-called “Air Defense Identification” zone, shown on the map below, which includes not only the Diaoyu/Senkaku islands in question, but stretches from South Korea all the way to Taiwan, and which requires that any overflights submit their plans to Beijing in advance. 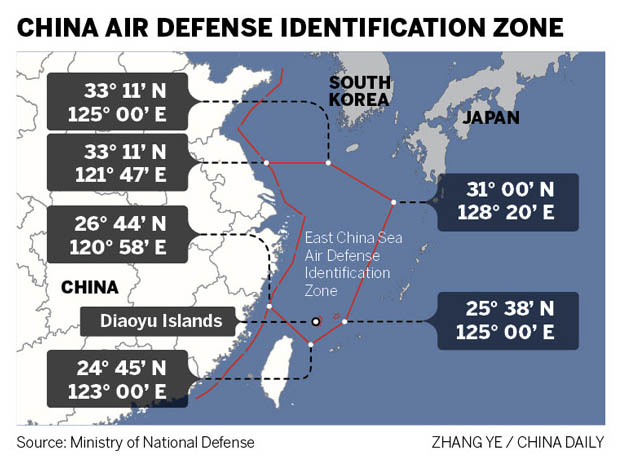 The response by Japan and the US was immediate, with Japan blasting China’s retaliation to its own annexation of the Senkakus a year earlier and demonstratively neither Japan Airlines nor ANA complying with China’s demands, while the US, demonstrating its allegiance to Japan, flew B-52 bombers above the Air Defense Zone.

China promptly responded to what it perceived was Western hypocrisy:

China’s announcement to establish an Air Defense Identification Zone in East China Sea has drawn criticism from the United States and Japan, yet their blame is wrong.

Their logic is simple: they can do it while China can not, which could be described with a Chinese saying, “the magistrates are free to burn down houses while the common people are forbidden even to light lamps.”

It is known to all that the United States is among the first to set up an air defense zone in 1950, and later more than 20 countries have followed suit, which Washington has taken for granted.

However, as soon as China started to do it, Washington immediately voiced various “concerns.” U.S. Secretary of State John Kerry on Saturday voiced concerns over the zone, fearing it might “constitute an attempt to change the status quo in the East China Sea,” and a White House spokesman on Monday called the Chinese announcement over the weekend “unnecessarily inflammatory.”

Japan set up such a zone in the 1960s and it even one-sidedly allowed the zone to cover China’s Diaoyu Islands. But when China set up the zone covering the Diaoyu Islands, Tokyo immediately announced it “unacceptable” and Abe even called China’s move “dangerous.” It is totally absurd and unreasonable.

In one word, both Washington and Tokyo are pursuing double standards.

The latter should not come as a surprise to China, and the reason why such double standards are allowed to exist in a US superpower legacy world is because neither Japan nor the US believe China would actually dare to re-escalate further. However, in a world in which the US is no longer an undisputed superpower (especially in the aftermath of the Syrian debacle in which Putin schooled the Obama administration) that is changing.

The first clear indication that China would not just sit there and do nothing, came overnight when China’s first aircraft carrier, the Liaoning, passed through the Taiwan Strait on Thursday morning on its way to a training mission in the South China Sea. 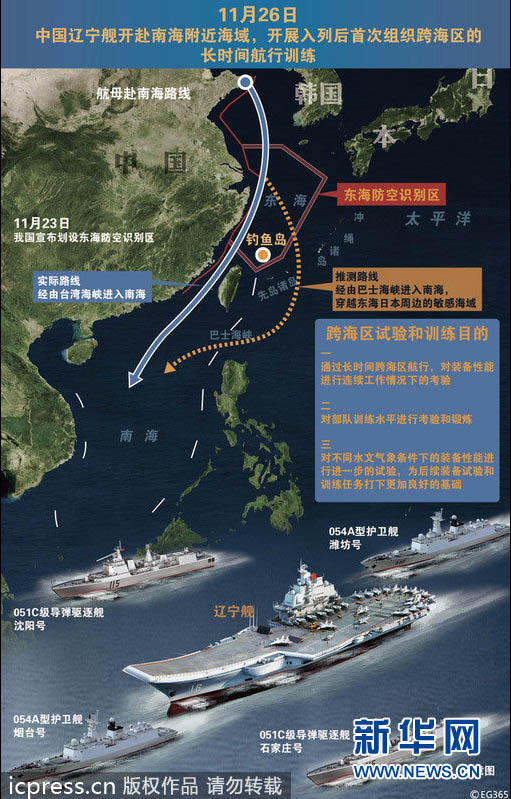 Naturally, the training mission is just the pretext. China’s long-running if dormant feud with Taiwan, officially the Republic of China, is perhaps the best proxy of US interests in the region, where thanks to the Taiwan Relations Act of 1979, the US sells arms and provides military training to the Taiwanese armed forces. China considers US involvement disruptive to the stability of the region, and made that quite clear in 2010 when Obama announced the decision to sell $6.4 billion in military hardware to the island leading to threats of economic sanctions from the mainland.

Which is why China crossing the Straits of Taiwan for the first time with its brand new aircraft carrier is nothing short of a message to Obama. From Xinhua:

It took about 10 hours for the carrier and its four escort ships to get through the strait separating the Chinese mainland and Taiwan.

The Liaoning entered the Taiwan Strait on Wednesday afternoon after it left its home port in Qingdao of east China’s Shandong Province on Tuesday for the South China Sea on a scientific and training mission.

It was escorted by two missile destroyers, the Shenyang and Shijiazhuang, and two missile frigates, the Yantai and Weifang. 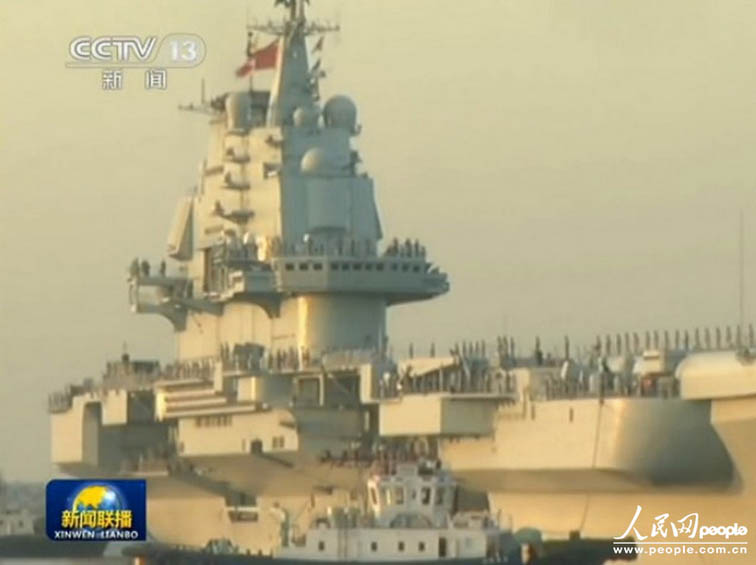 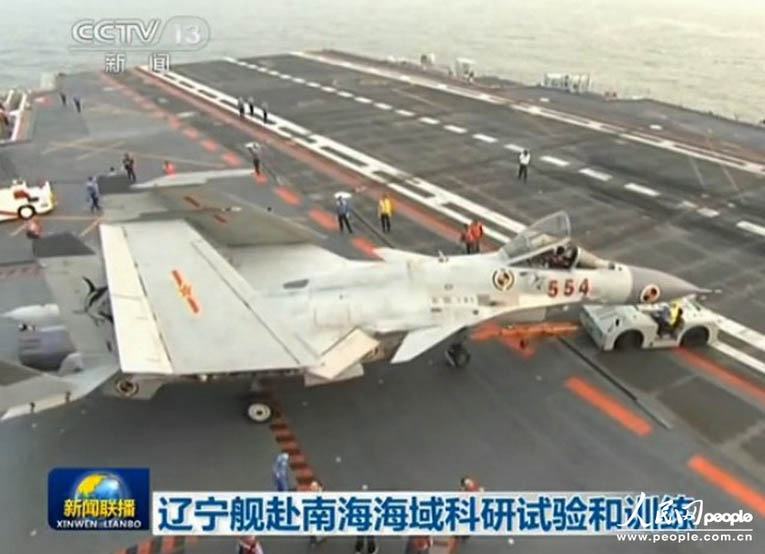 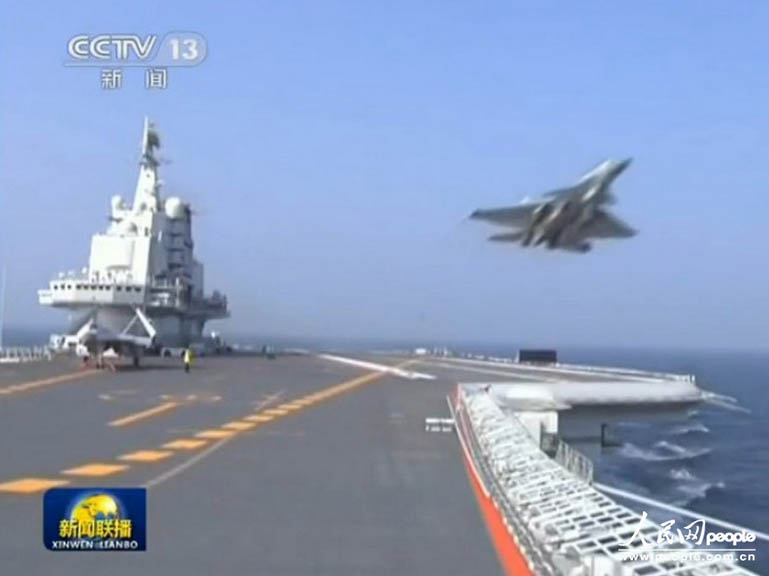 The narrative gets scarier:

“During the voyage, the carrier has kept a high degree of vigilance against approaches from foreign warships and aircraft, according to Liaoning Captain Zhang Zheng. This is the first time the carrier has conducted a cross-sea training voyage and passed through the Taiwan Strait since it was commissioned into the People’s Liberation Army (PLA) Navy in September last year, according to Zhang.”

But where it gets worst is that as BBC reported minutes ago, China has not only sent a symbolic message to the US, but a very literal one to Japan and everyone else who thought China would just sit there and do nothing, when it dispatched its own warplanes over the air defense zone.

China has said all planes transiting the zone must file flight plans and identify themselves, or face “defensive emergency measures”. But Japan, South Korea and the US have all since flown military aircraft through the area.

China’s state news agency Xinhua quoted an air force colonel as saying the the warplanes had carried out routine patrols. The zone includes islands known as Senkaku in Japan and Diaoyu in China, which are claimed by Japan, China and Taiwan.

He said the country’s air force would remain on high alert and would take measures to deal with all air threats to protect national security.

In Xinhua’s Chinese language version of the article, the colonel said the aircraft would “strengthen the monitoring of targets in the air defence zone and do their duty”.

Concurrently, perhaps to diffuse the edge, China’s propaganda machine made this latest development seem like it was all perfectly normal:

China on Thursday confirmed the smooth operation of flights over the country’s newly established Air Defense Identification Zone in the East China Sea. Everybody can see that flights over the zone have been normal and safe, Foreign Ministry spokesman Qin Gang told a daily press briefing, adding that in particular, civil flights have not been impacted at all.

“We expect all sides, including aviation companies, to actively coordinate with us and jointly safeguard flight safety,” Qin said, adding that aviation companies from many countries have submitted flight applications to the Chinese aviation authority.

So what happens if aviation companies do not coordinate: just how unsafeguarded will flight safety be?

What happens next: will Japan once again prod the not so sleeping dragon, and continue flying commercial (and military) airplanes over China’s expanded zone of control, without preclearance with Beijing, and will the US send some more strategic bombers just to prove that Obama didn’t win the Nobel peace prize for nothing?

And will then China once again re-escalate, perhaps through an “accidental” engagement with what it “vigilantly” thought was an offensive act by “foreign warships and aircraft?” resulting in a major diplomatic scandal or worse. Or will it simply, and more effectively, launch a salvo of a few hundred billion US Treasurys into the electronic ether, sending the 10 Year yield over 3% and the Fed scrambling to preserve its centrally-planned house of cards?

So, the ball is now in the court of Japan, which lately has been engaging in increasingly more desperate and irrational actions to preserve a sense of control over its imploding economy and the whole “Fukushima thing”, and which means that much more entertainment is imminent.