The Republicans’ “Keep Your Health Plan Act of 2013” bill has passed the House (as somewhat expected). However, what is more critical – as we noted previously – is that a large number of Democrats broke ranks and voted for the bill.

39 House Democrats voted in favor, shunning Obama’s proclamation that he would veto the bill (which he described as “threatening the health care security of hard working, middle class families,”) anyway if it came to his desk. It is unlikely to pass the Senate. 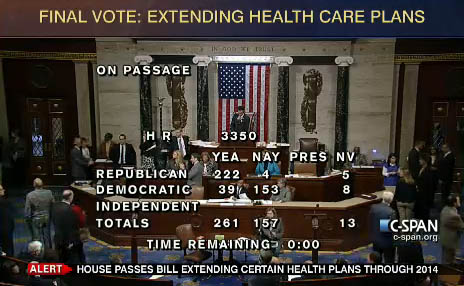 Why this is a big deal? Here’s what Obama said about the bill:

With health care costs rising at such low rates, “this bill would be a major step back,” reads the White House statement on the law. H.R. 3350 rolls back the progress made by allowing insurers to continue to sell new plans that deploy practices such as not offering coverage for people with pre-existing conditions, charging women more than men, and continuing yearly caps on the amount of care that enrollees receive. The Administration supports policies that allow people to keep the health plans that they have. But, policies that reverse the progress made to extend quality, affordable coverage to millions of uninsured, hardworking, middle class families are not the solution. Rather than refighting old political battles to sabotage the health care law, the Congress should work with the Administration to improve the law and move forward. The final line reads, “If the President were presented with H.R. 3350, he would veto it.”