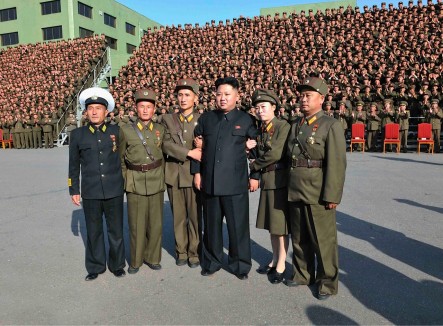 A report by Bruce Bennett and the RAND Corporation has brought attention to one of the most important issues for international politics. Ironically, despite being a region of vital interest within American foreign policy, there has been very little public discussion of what to do in the event of government collapse in North Korea. Bennett’s timely report provides a series of vital contributions to the discussion and further outlines the lack of preparation in political, social, economic and military terms. Yet beyond the critical end game for the Korean peninsula are deeper questions concerning how any international force might respond. Specifically, how can the U.S. and Republic of Korea effectively mobilize regional powers with their differing security and development goals?

International cooperation can alleviate geopolitical tension and inform policymakers while sharpening the tools of statecraft in preparation for engaging the uncertainties of an all but certain crisis on the horizon. The U.S. must begin to consider the requirements of intervention – not to depose a totalitarian regime for the sake of an ideological crusade, but as pragmatic, necessary planning in the event weapons of mass destruction enter the calculus as a credible, serious danger.

Unpredictable North Korean rhetoric offers scant evidence for anticipating or understanding Pyongyang’s tightly managed system of control. Indeed, many revolutionary or transformational periods in history have been poorly anticipated by external actors whom otherwise might have played a more constructive role in their outcome. Invisible factional rivalries, natural or man-made disasters, and blurred lines of sovereign authority are only a few factors that might contribute to the collapse of the totalitarian system. Resulting anarchy involving weapons of mass destruction and the internal struggle for power should prompt the most serious concern. The event of nuclear use, or clear evidence of momentary launch, could escalate to outright conflict and plunge East Asia into a tumultuous period with unforeseen consequences. Yes, nuclear threats and open hostility follow a longstanding pattern of belligerent rhetoric from Pyongyang, but prolonged uncertainty only heightens the risk of miscalculation. A major crisis scenario that destabilizes the North Korean government and its mechanisms of control, no matter how unlikely, should prompt the international community to consider a multilateral framework for intervention.

Any comprehensive framework committed to stabilization and reconstruction must consider cross-cutting principles that can be directed toward achieving the desirable end state of a peaceful Korean peninsula. First, Seoul could lead the process of Korean unification backed by the political legitimacy of a democratic state faced with an imminent threat on its territorial border. A legitimate claim to self defense reinforces the long-term goal of Korean unification under the auspices of a self-sufficient and transparent democratic government, a favorable outcome quickly gaining traction in Beijing. Second, and most important to the international community, stability could be achieved through a unity of effort by regional security partners seeking to move the peninsula from conflict to a manageable level of development. Quelling a potentially transnational civil war involving weapons of mass destruction is a vital interest of regional neighbors and the international community alike. Finally, the incorporation of non-governmental organizations holds the potential to dramatically accelerate the process of modernization and diminish long-term social and economic inequalities that could manifest into political grievances following unification. Toward this end game, and before major reconstruction, any intervening force must achieve minimal levels of stability in terms of physical and human geography.

The first step toward planning a credible response is to consider the absence of a totalitarian regime previously possessing rigid control over territory, weapons of mass destruction, and the civilian population. Working under the assumption that Chinese and South Korean border issues could be mitigated by their respective militaries, and WMD tracked and secured by American military forces working alongside integrated allies, the preeminent question becomes one of human security. Specifically, how to deal with twenty million physically and psychologically scarred individuals as an operational challenge. Regardless of the ongoing struggle for power and stability, these individuals represent a major hurdle for any external force crossing the 38th parallel and constitute the bulk of human terrain. For many, their day-to-day lives reflect a permanent wartime experience, an existence on the edge that has defined families for more than three generations. Devout loyalty to the North Korean system is arguably so ingrained within many citizens, it is difficult to project how the majority of individuals would behave after the cataclysmic event of totalitarian collapse.

There would likely be a profound absence of the overarching stability that has come to define the norm within Pyongyang’s invasive culture of oppression. Beyond fundamental necessities of food, water, shelter and physical security, what unforeseen conditions might an external group encounter among the civilian population? The disintegration, or even transformation, of this familiar norm would potentially compound dangerous social, economic and political inadequacies while pushing individuals past an already desperate state of existence. To paraphrase experts, exposure to an event involving potential death or serious injury to the self or others leads to intense states of fear, helplessness or horror. Under this scenario, an outside group would likely encounter upwards of twenty million individuals suffering from the effects of severe grief and incapacitating post-traumatic stress disorder. These reactions might appear as abnormal reactions to normal stress, but inside the reality of North Korea, it would reflect a normal reaction to abnormal stress. Whether an intervening humanitarian force, or an individual state dealing with refugees fleeing across its border, responsible powers should not overlook such a traumatic moment for geopolitics.

Lessons in Iraq and Afghanistan point to a roadmap for civilian engagement strategies that could be applied though cooperative security action. Provincial reconstruction teams (PRT) represented a concerted effort to utilize joint civil-military teams to provide security and support development efforts during conflict and subsequent reconstruction. There have been three distinct models with varying composition that demonstrated different levels of effectiveness. In particular, the British model placed a high emphasis on civil-military integration and partnerships, in contrast to U.S. and German PRT models led by the military. The British model also had a high level of responsiveness to suggestions made by non-governmental organizations and other civilian organizations that specialized in the regional, cultural and social aspects of the operational environment. This cooperative aspect would be integral for any international force composed of distinct – and potentially rival – powers. Competitive realpolitik might further be dampened by sharing mission responsibilities and incorporating nongovernment organizations from each state involved – especially humanitarian organizations.

A larger variance of the British model could include units from regional security partners tasked with specific operational assignments dependent on capability. South Korea would take the lead in political and cultural affairs with the Ministry of Unification serving as the central governing authority working in tandem with local North Korean elements able to manage districts. The United States and China would be capable for providing major logistical and military support and, in addition to securing any weapons of mass destruction, assist South Korean forces in a shape, clear, and hold strategy with Seoul leading the building phase and directing international support to areas where it is most needed. This would represent an all-encompassing effort led by and for the Korean people to generate conflict-free zones of human development, areas paramount toward long-term stability where additional foreign aid could accelerate the healing process for a nation torn asunder for more than three generations.

Traditional units tasked with reconstruction could focus on adequate sources of fresh water and critical infrastructure. Japanese units with specialist medical and engineering equipment that performed admirably in the past could begin to tangibly mend historical divides between Seoul, Pyongyang and Tokyo. Currency guarantees and mechanisms for market stability could be implemented to address widespread looting, hording, black market trading, and increasing civil violence. North Korean political elites and individuals capable of assuming leadership positions in regional zones of development might be seconded as conduits for resource management. Outside specialist humanitarian units familiar with Korean culture would go a measurable way toward winning hearts and minds, or at least maintaining a sense of normalcy for a nation experiencing social, political, and economic trauma on a massive scale. Additional sociological attaches could only better equip forces to better redress problems as they arise: it could be a force multiplier. Indeed, the most effective force deployed alongside security teams might be a brigade of social scientists able to support field operations, an unconventional approach in many respects, but North Korea is the unconventional state of the modern era.

For the U.S., this reflects not only the reality of resource scarcity and austere military budgets, but is a better approach that draws on the expertise of non-government experts that comprehend social and economic dimensions better than many civil servants and military units spread across a wide assortment of responsibilities. Establishing cultural awareness and mapping the human terrain also creates major operational advantages for American forces. Burden sharing with South Korea, Japan and China not only alleviates stress on the United States, but can efficiently marshal capability without approaching the maximum, national effort often associated with the American way of war. Follow-up development efforts and foreign investment would also be most effectively applied when first directed by and for the Korean people. In concert with a limited military focus on security, these foundational partnerships can develop the capability and flexibility necessary for navigating the dangers of a major crisis on the Korean peninsula.

Nobody should actively seek intervention based solely on the rhetoric of human rights violations or ideological principles. Yet responsible great powers should prepare for the eventuality as seldom has a major crisis occurred with significant warning and the luxuries of foresight. Active stewardship can remedy grievous human rights violations, alleviate regional security concerns, and dampen great power competition. An evolving plan of action can equip the international community to deal with known challenges while simultaneously developing the organizational capacity to marshal an effective response to the unknown dynamics that emerge during a crisis. A credible plan of action might also encourage more responsible behavior by the Kim regime and decrease the likelihood of any major crisis requiring intervention. Zeroing in on the core human security dynamics that impact the day-to-day lives of each individual is the first step toward crafting a more complete picture of the humanitarian crisis in the Hermit Kingdom. Preparing for the unthinkable is not a simple moral imperative, but responsible leadership in the twenty-first century.