Ministry of the Environment, Government of Japan: The “Act on Special Measures Concerning the Handling of Radioactive Pollution” was enacted in August 2011, in response to the unprecedented situation of radioactive pollution after the accident at TEPCO’s Fukushima Daiichi Nuclear Power Station. […] a new policy framework for the off-site decontamination has been arranged […] There are two categories of contaminated areas under the Act. The first one is the “Special Decontamination Area”, where decontamination is implemented by the national government. It includes 11 municipalities in Fukushima Prefecture. The second one is the “Intensive Contamination Survey Area”, where decontamination is implemented by each municipality with financial and technical supports by the national government. […] 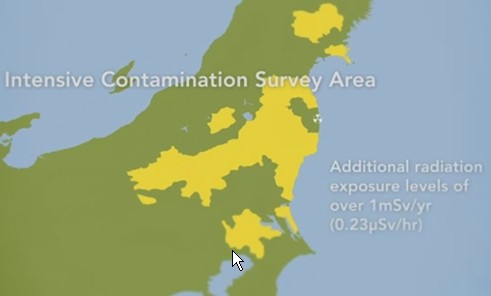 Mainichi, Sept. 24, 2013: Municipalities criticize gov’t agency for limiting Fukushima disaster aid […] At least 13 municipalities in Chiba, Ibaraki and Tochigi prefectures have sent critical comments to the Reconstruction Agency for its basic policy to limit the scope of assistance to only areas in Fukushima Prefecture […] Those municipalities are: Noda, Kashiwa [~10 miles from downtown Tokyo], Kamagaya [~10 mi], Matsudo [~5 mi], Shiroi [~10 mi], Nagareyama [~5 mi], Sakura [~20 mi], Abiko [~10 mi] and Inzai [~20 mi] in Chiba Prefecture; Toride [~15 mi], Moriya [~15 mi], and Joso [~20 mi] in Ibaraki Prefecture; and Nasushiobara in Tochigi Prefecture. […] The central government sets the maximum permissible amount of radiation exposure per year for the general public at 1 millisievert (0.23 microsieverts per hour). The government designated those areas (municipalities) that were exposed to radiation exceeding the permissible limit as “Intensive Contamination Survey Areas,” and has since been providing assistance to them. Currently, 100 municipalities in eight prefectures are designated as “Intensive Contamination Survey Areas,” and the 13 municipalities are among them. […] all of the 13 municipal governments called for attaching importance to health assistance for children and pregnant women. They are critical of the government for applying “double standards” with the decontamination law and the nuclear disaster aid law. […]

World Nuclear News, Sept. 18, 2013 (Emphasis Added): […] In the Intensive Contamination Areas, decontamination work is being implemented based on plans developed at the municipal level, with some municipalities setting targets of five years to complete the work and others choosing a timescale of two to three years. […]

If you still live in Tokyo …. you should RUN FOR YOUR LIFE!

And here is why: