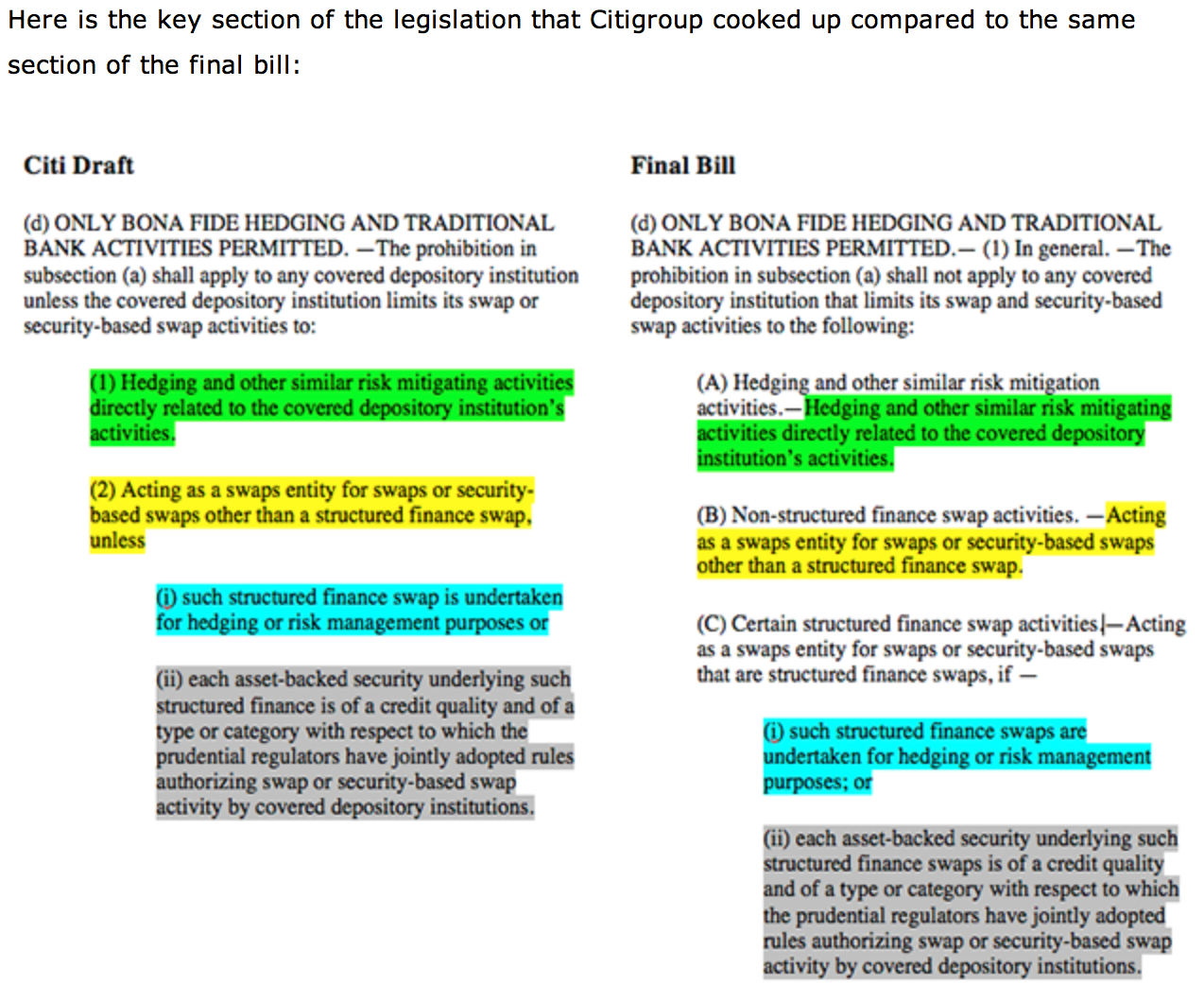 Unsurprisingly, the main backer of the bill is notorious Wall Street lackey Jim Himes (D-Conn.), a former Goldman Sachs employee who has discovered lobbyist payoffs can be just as lucrative as a career in financial services. The last time Mr. Himes made an appearance on these pages was in March 2013 in my piece: Congress Moves to DEREGULATE Wall Street.

More from the New York Times:

The House is scheduled to vote on two bills this week that would undercut new financial regulations and hand Wall Street a victory. The legislation has garnered broad bipartisan support in the House, even after lawmakers learned that Citigroup lobbyists helped write one of the bills, which would exempt a wide array of derivatives trading from new regulation.

“Bipartisan usually means some larger-than-usual deception is being carried out.”

The bills are part of a broader campaign in the House, among Republicans and business-friendly Democrats, to roll back elements of the 2010 Dodd-Frank Act, the most comprehensive regulatory overhaul since the Depression. Of 10 recent bills that alter Dodd-Frank or other financial regulation, six have passed the House this year. This week, if the House approves Citigroup’s legislation and another bill that would delay heightened standards for firms that offer investment advice to retirees, the tally would rise to eight.

But simply voting on the bills generates benefits for both House lawmakers and Wall Street lobbyists, critics say. For lawmakers, it comes in the form of hundreds of thousands of dollars in campaign contributions. The banks, meanwhile, welcome the bills as a warning to regulatory agencies that they should tread carefully when drawing up new rules.

“The House is the odd man out in terms of doing Wall Street’s bidding,” said Marcus Stanley, policy director of Americans for Financial Reform, a nonprofit group critical of the financial industry. “They’re letting Wall Street write the law to its own benefit in ways that harm the public.”

Wall Street’s support from the House extends beyond favorable votes. When bank executives are called to testify before Congress, industry lobbyists distribute proposed questions to lawmakers and their staff, seeking to exert some control over the debate, according to emails written by staff members on the House Financial Services Committee that were reviewed by The Times.

The legislation, Mr. Himes said in an interview, poses no financial risk to the country. And while he is the second-largest recipient among House Democrats of financial sector donations, that is not what is compelling his vote, he said.

Of course not. What are you a conspiracy theorist?

“After inflicting so much pain and suffering on the American people, now is not the time to let the largest banks back into the casino,” Representative Maxine Waters, the ranking Democrat on the House Financial Services Committee, said in a statement.

Some House bills have the explicit purpose of delaying new regulation. One bill scheduled for a vote this week could temporarily restrain the Labor Department from imposing a new rule requiring some financial advisers to take on a fiduciary duty to clients when providing retirement investment advice. Such a duty would demand that the advisers act in the best interest of the client.

The bill that Citigroup helped draft takes aim at one of the more contentious provisions in Dodd Frank, a requirement that banks “push out” some derivatives trading into separate units that are not backed by the government’s insurance fund. The goal was to isolate this risky trading and to prevent government bailouts.

How contentious! This is America after all.