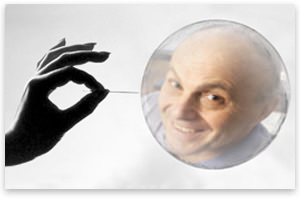 Fama is not just a Nobel laureate. He also co-authored the textbook, The Theory of Finance, with another Nobel winner, Merton H. Miller. He won the 2005 Deutsche Bank Prize in Financial Economics as well as the 2008 Morgan Stanley-American Finance Association Award. He is seriously a big deal in the economics world.

So if Fama has it right, investors should just throw in the towel, shove their money into index funds, and blissfully wait until they need the money. Before you do that, read what Fama had to say about the 2008 financial crisis.

The New Yorker‘s John Cassidy asked Fama how he thought the efficient-market hypothesis had held up during the recent financial crisis. The new Nobel laureate responded:

“I think it did quite well in this episode. Prices started to decline in advance of when people recognized that it was a recession and then continued to decline. There was nothing unusual about that. That was exactly what you would expect if markets were efficient.”

When Cassidy mentioned the credit bubble that led to the housing bubble and ultimate bust, the famed professor said:

No matter the facts, Fama has his story and he’s sticking to it.

“I think most bubbles are 20/20 hindsight,” Fama told Cassidy. When asked to clarify whether he thought bubbles could exist, Fama answered, “They have to be predictable phenomena.”

The rest of us, who lived through the tech and real estate booms while Fama was locked in his ivory tower, know that in a boom people go crazy. There’s a reason the other term for bubble is mania. According to Webster’s, “mania” is defined in an individual as an “excitement of psychotic proportions manifested by mental and physical hyperactivity, disorganization of behavior, and elevation of mood.”

Financial bubbles have occurred for centuries. In January 1637, the price of the common Witte Croonen tulip bulb rose 26 times, only to crash to 1/20th of its peak price a week later.

Eighty years later in France, John Law flooded the French economy with paper money and shares of the Mississippi Company. The public went wild for stock in a company that had no real assets. The shares rose twentyfold in a year, only to crash. Law, a hero in the boom, was run out of France in disgrace.

At the same time across the channel, the British public bid up South Sea Company shares from ₤300 to ₤1,000 in a matter of weeks. Even the brilliant Sir Isaac Newton was caught up in the frenzy. He got in early and sold early. But he then jumped back in near the top and went broke in the crash.

However, investor returns have not been the best. The last complete calendar decade for stocks ending in 2009 was the worst in history. The Wall Street Journal reported, “Since the end of 1999, stocks traded on the New York Stock Exchange have lost an average of 0.5% a year thanks to the twin bear markets this decade.”

When you adjust that for inflation, the results were even worse, with the S&P 500 losing an average of 3.3% per year.

This decade, stocks have been on a tear—as have bonds, farmland, and art. At first glance, it’s nonsensical that the price of virtually everything is rising. But when you remember that the Federal Reserve’s cheap money has flooded Wall Street but hasn’t come close to Main Street, it becomes clear. The money has to go somewhere.

If Fama were correct, there would be no legendary investors like Doug Casey or Rick Rule. There would be no opportunities for ten-baggers and twenty-baggers in resource stocks.

Of course savvy investors know there are hundred-dollar bills to be picked up in the market. With tax-selling season upon us, now is the time to be shopping for bargains.

Doug’s friend Rick Rule often says, “You can either be a contrarian or a victim.” Taking Fama’s advice will make you a victim. The path to wealth is to run against the herd, not with it.