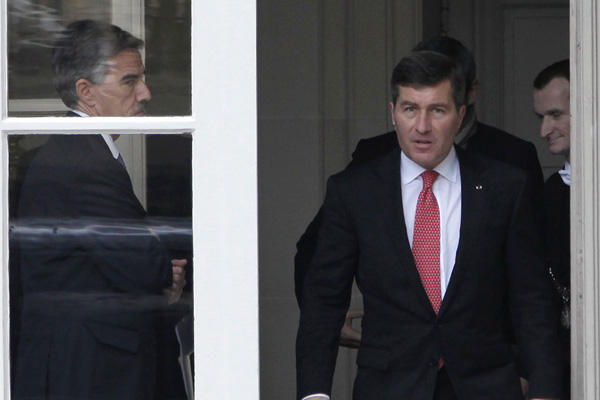 US Ambassador to France Charles H. Rivkin, right, leaves the Foreign Ministry in Paris, after he was summoned Monday, Oct. 21, 2013. The French government had summoned the ambassador to explain why the Americans spied on one of their closest allies.

France summoned the US ambassador today after Le Monde reported that the NSA intercepted 70.3 million phone calls and text messages in France over 13 months.

Both the French and Mexican governments are demanding answers from the US regarding new reports that the National Security Agency has been conducting large-scale interceptions of French telecommunications and hacked the email of the last president of Mexico.

The French government summoned the US ambassador today to answer questions about a report in Le Monde that detailed the volume of NSA spying on French telecommunications in December 2012 and early January 2013 – which the French newspaper totaled at 70.3 million phone calls and text messages.

“If an allied country spies on France or spies on other European countries, that’s totally unacceptable,” Valls told Europe 1 radio.

The US ambassador, Charles Rifkin, declined to comment on being summoned to the French ministry, Reuters adds, though he noted that French-US relations on military and intelligence issues were “the best [they’ve] been in a generation.”

According to an English version of the report published on Le Monde’s website, documents leaked by former NSA contractor Edward Snowden show a pattern of high-volume, though apparently targeted, spying on French telecommunications. Le Monde writes:

Amongst the thousands of documents extracted from the NSA by its ex-employee, there is a graph which describes the extent of telephone monitoring and tapping (DNR – Dial Number Recognition) carried out in France. It can be seen that over a period of 30 days – from 10 December 2012 to 8 January 2013, 70.3 million recordings of French citizens’ telephone data were made by the NSA. This agency has several methods of data collection. According to the elements obtained by Le Monde, when a telephone number is used in France, it activates a signal which automatically triggers the recording of the call. Apparently this surveillance system also picks up SMS messages and their content using key words. Finally, the NSA apparently stores the history of the connections of each target – or the meta-data.

Although the exact subjects of the intercepted messages are unknown, Le Monde writes that what information is available “leads us to think that the NSA targets concerned both people suspected of association with terrorist activities as well as people targeted simply because they belong to the worlds of business, politics or French state administration.”

Le Monde adds that American authorities declined to comment on the report, but pointed the paper towards a June 8, 2013, document offered by US Director of National Intelligence James Clapper that said foreign citizens could not be spied upon “without a valid foreign intelligence purpose.”

In a separate article, Le Monde notes that almost all of the NSA’s focus in France seems to be on two communications websites: wanadoo.fr and alcatel-lucent.fr. Orange and Alcatel-Lucent, the respective owners of the two sites, declined to comment on Le Monde’s report.

Le Monde’s revelations about the scope of NSA spying in France come on the heels of a report in Der Spiegel, published Sunday, that the US agency had also successfully hacked the email of former Mexican President Felipe Calderon while he was in office.

According to the NSA, this email domain was also used by cabinet members, and contained “diplomatic, economic and leadership communications which continue to provide insight into Mexico’s political system and internal stability.” The president’s office, the NSA reported, was now “a lucrative source.”

The Los Angeles Times reports that the Mexican government has demanded that the US investigate the spying, which Mexico calls “unacceptable, unlawful and contrary to Mexican law and international law.” The Times also notes that:

Some Mexicans will consider it particularly galling that the US targeted Calderon. The conservative president, who served from 2006 to 2012, allowed US security agencies an unprecedented amount of access to Mexico in an effort to fight off the powerful drug cartels. Some here viewed the increased US presence as a breach of Mexican sovereignty.