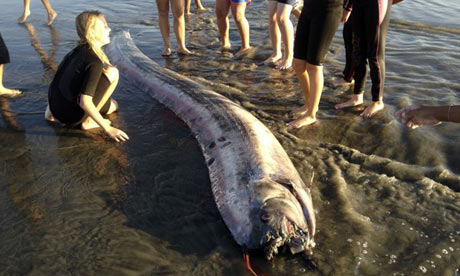 A rare oarfish is found washed up at Oceanside, California, on Friday. The oarfish, which can grow to 50ft, is the world’s longest bony fish. Photograph: Mark Bussey/AP

Another “sea serpent” has attracted gawkers on a southern California beach. This time the rare, snakelike oarfish washed up on Friday afternoon in Oceanside. The U-T San Diego newspaper reports that it measured nearly 14ft long.

While it is unusual to find the deep-water fish near shore, this is the second time in the past week that one has surfaced. On Sunday, a snorkeler off Catalina Island found an 18ft oarfish and dragged it ashore with the help of a dozen other people.

According to the Catalina Island Marine Institute, oarfish can grow to more than 50ft (15 metres), making them the longest bony fish in the world. They are probably responsible for sea serpent legends throughout history.

Earlier in the week, a rare whale with a dolphin-shaped head and sabre-like teeth was found dead on Venice Beach, Los Angeles, even though it prefers frigid subarctic waters.

The roughly 15ft female Stejneger’s beaked whale washed ashore Tuesday night, the Los Angeles Times reported. A truck hauled away the mammal, which was being examined at the Los Angeles County Natural History Museum to determine how it died.

The Stejneger’s beaked whale is rarely seen in the wild. The species typically dives deep in subarctic waters to feed on squid and small fish. It is believed to migrate as far south as northern California. How the whale ended up so far south will probably remain a mystery.

“This is the best,” said Nick Fash, an education specialist for the Santa Monica-based environmental group Heal the Bay. “[Previous finds] aren’t anything like this. This is a treat.”

Males are known for their sabre teeth that stick up midway from each side of the lower jaw. However, the teeth of females and their offspring remain hidden beneath the gum tissue.

The whale was alive when it washed ashore, said Peter Wallerstein of Marine Animal Rescue. Its body was covered in bites from so-called cookie-cutter sharks that feed by gouging round pieces of flesh from larger animals.

Because the species is not seen much anywhere, the autopsies of washed-up carcasses are the best source for scientists to gather information.