The Japan Times, Oct 18, 2013: Strontium readings spike 6,500-fold in one day […] Radiation levels in groundwater under Tokyo Electric Power Co.’s Fukushima No. 1 nuclear plant are soaring, Tepco said Friday after taking samples from an observation well. Tepco said 400,000 becquerels per liter of beta ray-emitting substances such as strontium were detected in water sampled Thursday from the well […] The level of becquerels, a record high for water in that well, was up 6,500-fold from the 61 becquerels found Wednesday. Tepco was planning to pump groundwater up […] before the water flows into the damaged reactor buildings and becomes heavily contaminated with radioactive materials. But that plan appears in jeopardy because the sharp increase in the levels of radioactive materials in the observation well suggest the radioactive groundwater is spreading. […] It is believed some 400 tons of radioactive groundwater is flowing into the Pacific daily. […] 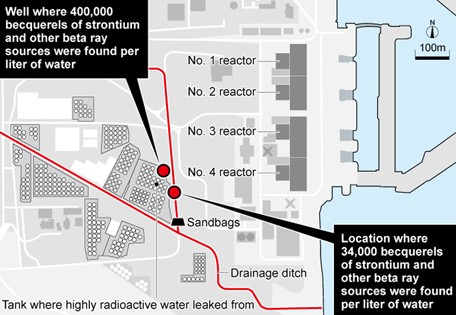 NHK, Oct. 18, 2013: They also said the level of radioactive tritium also tripled to the highest-ever figure of 790,000 becquerels per liter.

Asahi, Oct. 18, 2013: TEPCO also said Oct. 18 a record level of radioactivity was found in a drainage ditch […] The water taken on Oct. 17 contained 28,000 to 34,000 becquerels of beta ray sources, such as radioactive strontium, per liter, about 10 times higher than the previous day. The levels apparently rose because radioactive materials on the ground flowed into the ditch during Typhoon No. 26 on Oct. 16 […]