… or just preparing for what has been planned & plotted many, many, many years ago. 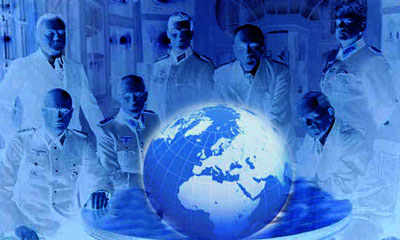 While the average American may have been convinced that the economy is recovering and happy days are dead ahead, few are talking about the reality of what’s going on behind the scenes. They act as if the crisis of 2008 has long passed, and whatever was responsible for it has now been solved through massive trillion dollar bailout injections.

Most fail to realize how serious of an issue we faced just five years ago, and even fewer understand how close we are to a collapse so incredibly horrific that it could change the very landscape of this country.

For those paying attention to the warning signs, it should be clear that something isn’t right.

Charlie McGrath, of Wide Awake News, weighs in and suggests that not only is the next stage of collapse rapidly approaching, but that our government is fully expecting it.

It was sold to the people of this country that bailouts had to happen, because if they did’t happen we would see pandemonium in the streets.

We know that never happened. We know that the people of the world were scared into that happening, yet we spent trillions of dollars to rescue these institutions, namely the ones who were not regulated in the first place who caused the problem, who are even larger [now] than they were before…

So what happens when the next crisis hits? And it could be very, very soon.

If you want to know where we’re going, listen to the words of the President – ‘We’re never going to have another taxpayer supported bailout.‘

All we have to do is look at the Financial Stability Board inside Europe to see what they did and to see the stage that’s been set for the next round of collapse… The people who have their money in the banks are going to be the ones that lose.

This is the agenda going forward.

The Associated Press confirmed in February that the Department of Homeland Security has an open purchase order for 1.6 billion rounds of ammunition. Armored vehicles have been seen flowing through the streets, drones flying through the air, the expansion of the security industrial complex.

For what? For what?

Somebody in government is afraid of what is coming.

And you can’t believe the lies of this administration of the past or the agenda that’s been put forward to have us believe that this is all to protect us against terror.

Somebody knows what is coming… Is it all just coincidence?

We know the U.S. government security apparatus has been simulating economic collapse scenarios and the fallout that would follow, and this is why they are actively implementing a multi-billion dollar control grid all over this country.

There can be no other explanation for the activities of the Department of Homeland Security, the military and governments on all levels – from local to federal.

In fact, the US Treasury Department just released a report indicating that the nation’s debt crisis could lead to a collapse so catastrophic that it could last more than a generation. Whether that happens on October 17, 2013, or five years from now, it’s only a matter of time.

We’re talking scenarios much more severe than the Great Depression.

But this isn’t just happening in America. Switzerland recently engaged in war games that simulated an economic collapse scenario, as well as an invasion by bankrupted nations and millions of refugees. In 2011, the British government developed plans to evacuate their citizens from European countries in expectation of monetary and economic crisis.

The exercises and drills may be compartmentalized so that most who are partaking in them don’t really know why, but there are those in the higher echelons of power that know very well what the end game is going to be.

None of this is a coincidence.

If you aren’t taking steps to prepare for a new paradigm – one plagued with destitution, riots, starvation and bloodshed – then you are going to be a victim of what’s coming.

Gordon Brown is right. When the economic system breaks down or the dollar collapses food, fuel, and medicine will be nearly impossible to acquire. The experience of Greeks, who saw this first hand, is a perfect example.

The only option for the government at that point will be to control the looting and violence that follows by declaring Martial Law and locking this country down.