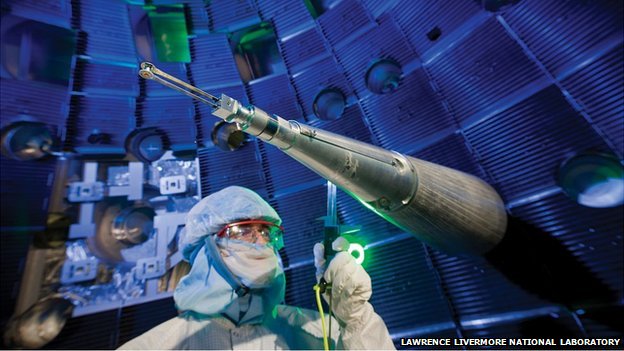 Researchers at a US lab have passed a crucial milestone on the way to their ultimate goal of achieving self-sustaining nuclear fusion.

Harnessing fusion – the process that powers the Sun – could provide an unlimited and cheap source of energy.

But to be viable, fusion power plants would have to produce more energy than they consume, which has proven elusive.

Now, a breakthrough by scientists at the National Ignition Facility (NIF) could boost hopes of scaling up fusion.

NIF, based at Livermore in California, uses 192 beams from the world’s most powerful laser to heat and compress a small pellet of hydrogen fuel to the point where nuclear fusion reactions take place.

This is a step short of the lab’s stated goal of “ignition”, where nuclear fusion generates as much energy as the lasers supply. This is because known “inefficiencies” in different parts of the system mean not all the energy supplied through the laser is delivered to the fuel.

But the latest achievement has been described as the single most meaningful step for fusion in recent years, and demonstrates NIF is well on its way towards the coveted target of ignition and self-sustaining fusion.

For half a century, researchers have strived for controlled nuclear fusion and been disappointed. It was hoped that NIF would provide the breakthrough fusion research needed.

In 2009, NIF officials announced an aim to demonstrate nuclear fusion producing net energy by 30 September 2012. But unexpected technical problems ensured the deadline came and went; the fusion output was less than had originally been predicted by mathematical models.

Soon after, the $3.5bn facility shifted focus, cutting the amount of time spent on fusion versus nuclear weapons research – which was part of the lab’s original mission.

However, the latest experiments agree well with predictions of energy output, which will provide a welcome boost to ignition research at NIF, as well as encouragement to advocates of fusion energy in general.

It is markedly different from current nuclear power, which operates through splitting atoms – fission – rather than squashing them together in fusion.

NIF, based at the Lawrence Livermore National Laboratory, is one of several projects around the world aimed at harnessing fusion. They include the multi-billion-euro ITER facility, currently under construction in Cadarache, France.

However, ITER will take a different approach to the laser-driven fusion at NIF; the Cadarache facility will use magnetic fields to contain the hot fusion fuel – a concept known as magnetic confinement.

2 thoughts on “Nuclear Fusion Milestone Passed At US Lab”