According to Japan Meteorological Agency, Typhoon No.24 “Danas” is going to hit Fukushima plant area on 10/10/2013.

Since mid September, Tepco has had the contaminated water tank area overflow every time a Typhoon passed near the plant. 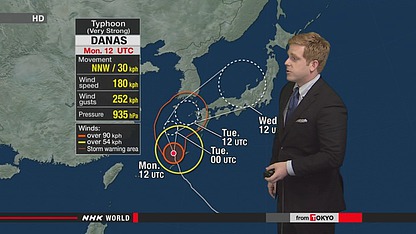 A powerful typhoon is moving north, with Okinawa and the remote islands of Kagoshima Prefecture engulfed in its storm zone.

The Meteorological Agency says Typhoon Danas was 110 kilometers west of the southern island of Tokunoshima at 8 PM on Monday. It is moving north-north-west at a speed of 30 kilometers per hour.

The storm has a central atmospheric pressure of 935 hectopascals and is packing winds of up to 180 kilometers per hour near its center.

The storm is expected to come very close to Okinawa’s main island and the remote islands of the Amami region late Monday, and approach Kyushu on Tuesday.

As of 7 PM, airlines have cancelled 146 domestic flights scheduled for Monday due to the storm.