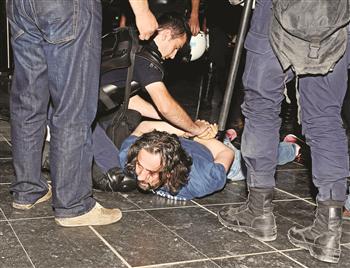 he move to strengthen police powers was precipitated by the countrywide Gezi Park protests, which began at the end of May.

A new regulation will allow Turkish police to detain those who possess the “risk of conducting a protest” from 12 to 24 hours without the demand of a prosecutor or a judge, prompting acute worries from opposition deputies.

The new regulations that will be conducted jointly by the justice and interior ministries will allow the police to detain a suspect who “may hold a protest” for up to 24 hours without any court decision while also increasing the penalties for resistance to police and damaging public property.

The move to strengthen police powers was precipitated by the countrywide Gezi Park protests, which began at the end of May.

Organizations which “tend to hold protests” will be monitored and their members could be detained by police if intelligence reports suggest they are planning to conduct a demonstration or action.

A judge will also be able to extend the 24-hour detention period if desired. Under the current law, a judge’s or prosecutor’s order is necessary to detain people in such cases.

The regulations will also increase the penalties for resistance to police and damage to public property. Those who possess Molotov cocktails might be sentenced to up to five years in prison under the new regulations. The draft also includes a board to regulate security forces, which will monitor malpractice within the institutions.

“These attempts might drag the country into chaos. The governments who attempt to do that will end in vain,” Yalçın told daily Hürriyet Oct. 6.

Main opposition Republican People’s Party (CHP) deputy Ali Serindağ said the regulation did not comply with the rule of law. “Giving the security forces such an authority without the permission of a prosecutor does not comply with rule of law. … Besides, the police must be well trained in intervening against demonstrations,” he added.

Another CHP deputy, İlhan Cihaner, described the regulation as a step behind “the inquisition” and “beyond fascism.”

“Now you can be detained just for being you even though you didn’t attend any protest,” Cihaner said.