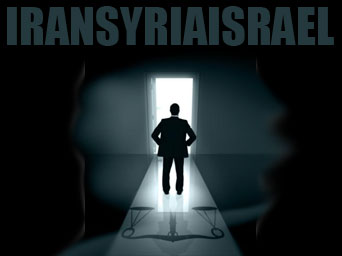 “Iran poses absolutely no threat to the world or the region,” he said. It’s true. Iran hasn’t attacked another country in centuries. It engages other nations responsibly. It deplores war. It prioritizes peace.

“Iran’s nuclear program (and) that of all other countries must pursue exclusively peaceful purposes,” said Rohani.

“I declare here, openly and unambiguously, that, notwithstanding the positions of others, this has been, and will always be, the objective of the Islamic Republic of Iran.”

“Nuclear weapons and other weapons of mass destruction have no place in Iran’s security and defense doctrine, and contradict our fundamental religious and ethical convictions.”

“Our national interests make it imperative that we remove any and all reasonable concerns about Iran’s peaceful nuclear program.”

Every nation is entitled to pursue peaceful nuclear development, he stressed. Other nations have no right to deny them.

Assad’s been interviewed a number of times. He responds forthrightly to questions asked. He does so responsibly.

It “was more of the same – full of allegations based on fabrications and lies.”

“In general, most statements made by American officials, whether in the current or previous administrations, do not have the least bit of credibility.”

US policy is “based on lies. The administration has not provided any evidence to support its claims.”

Assad agreed to eliminate his chemical weapons. He joined the Chemical Weapons Convention (CWC). He agreed to comply with its provisions. He’s doing so.

He granted them immediate/unfettered access to every site they wish to visit.

America’s media are dismissive. They’re relentless. They refuse to take yes for an answer. Iranian/Syrian hostility is visceral.

Lies substitute for honest reporting and opinion. On September 26, The New York Times headlined “Some Progress on Syria,” saying:

“The resolution to rid Syria of its chemical weapons is useful, if imperfect.”

The Times extended backhanded praise. On the one hand, it said Moscow “received a lot of credit.”

On the other, it said major power haggling suggests “Russia might revert to a more familiar, obstructive role by shielding (Assad) from punishment if he fails to comply.”

Times editors blamed Moscow for vetoing three previous UN resolutions. It did so responsibly. It did it to avoid war. It wants Syria’s conflict resolved diplomatically.

Assad was wrongfully blamed for “brutality against civilians.” Times editors ignore repeated crimes of war and against humanity committed by Western-enlisted death squads.

They include appalling atrocities. They’re responsible for multiple instances of chemical weapons use. The August 21 Ghouta attack was the most horrific.

Don’t expect Times editors to explain what’s most important. They repeatedly point fingers the wrong way. They wrongfully condemn Assad. They do it shamelessly.

They blamed him for attacking Ghouta. Western governments say so, they claimed. “Russia blames Syrian insurgents but has never offered any proof.”

False! Russia submitted plenty to UN inspectors. They ignored it. Their report was biased. It was incomplete. It ignored truth and full disclosure. It wasn’t worth the paper it was written on. Times editors didn’t explain.

They did so to engage America and other Western states. They did it to end decades of irresponsible anti-Iranian hostility.

Times editors called Iran “an adversary.” It continues to reject its sovereign rights. It wants Rohani and other Iranian officials to prove their good intentions.

Washington, other Western states, and Israel have all the proving to do. Iran unsuccessfully sought rapprochement for decades. Times editors never explain.

Rohani’s good faith outreach is “only words,” they said. Iranians “haven’t done anything to satisfy concerns about their nuclear program.”

False! Iran’s program is the world’s most intensively monitored. It cooperates fully with IAEA inspectors. It’s done so for years. It’s program is peaceful. No evidence whatever suggests otherwise.

Tehran has every right to do so. It complies fully with Nuclear Non-Proliferation Treaty (NPT) provisions. Times editors ignored what’s most important to explain.

They failed to mention Israel’s formidable nuclear, chemical and biological weapons. It’s a nuclear outlaw. It’s one of only four non-NPT signatories.

It violates CWC provisions. It uses banned weapons in all its wars. It tests horrific new ones.

It’s up to Iran to persuade world leaders it’s not building nuclear weapons, he claims. It’s up to him to end decades of hostility.

According to Times editors, “(n)o country feels more threatened by Iran than Israel. In addition to having a nuclear program, Iran is the main backer of Hezbollah and has provided arms and fighters to” Assad.

Israel’s only enemies are ones it invents. Hezbollah is part of Lebanon’s government. Assad’s defending his country against Western-backed foreign invaders. Don’t expect Times editors to explain.

Obama “is right that ‘the diplomatic path must be tested.’ ” WaPo editors didn’t explain that testing requires good faith on his part. Iran showed it fruitlessly for decades.

Instead they asked is Obama’s “optimism justified?” Rohani “excited Iran-watchers in the West with his charm offensive.” His Post op-ed promised “constructive dialogue.”

“But there has been no substance – and there is ample reason for skepticism that a reversal of Iran’s drive to achieve nuclear weapons capability is in the works,” said WaPo editors.

It bears repeating. No evidence suggests Iran pursues nuclear weapons. WaPo editors know. They didn’t say. They suppressed what’s most important to explain. They do it repeatedly.

They claim Rohani “has yet to offer any indication of what, if any, deviations the regime may be prepared to make from its previous refusal to limit that activity, accept more intrusive international inspections, or answer UN inspectors’ questions about suspected work on warheads and missiles.”

“Mr. Rouhani was in New York on Tuesday not because democracy triumphed in Iran but because Iran’s real leader decided to give the soft-sell strategy a try,” they said.

“A genuine renunciation of the capacity to build a weapon, and the acceptance of international controls that would enforce that commitment, looks far-fetched.”

“The danger is that, in the fevered atmosphere generated by Mr. Rouhani’s skillful public diplomacy, the United States and its allies will be induced into further, unwarranted concessions – or deluded into believing that a ‘grand bargain’ is possible with Iran.”

“Better to swiftly demand that Mr. Rouhani make clear his bottom line – and prick the bubble he has been inflating.”

Rohani’s election changed nothing. Iranians chose him democratically. Their process shames America’s. US voters have no say. Monied interests decide who governs.

Back room deals do so before polls open. WaPo and likeminded editors call it democracy. It’s the best money can buy. It shames the real thing.

Americans never had it. For sure they don’t now. Don’t expect WaPo editors to explain.

Passing Security Council resolution authority to eliminate Syria’s chemical weapons changes nothing. “If you choose to believe in the power of arms control over rogue actors, this is progress,” Journal editors said.

“Last weekend Syria submitted its declaration of its chemical weapons and delivery systems,” they said.

They called it incomplete. It cites US intelligence as its source. Its credibility is sorely lacking. Lies substitute for verifiable facts. Alleged Israeli intelligence is fabricated. So are French and British documents.

“The US and Israel have a good idea (about) what the Syrians have and may still be hiding,” said Journal editors. “The trick will be to compel Assad’s cooperation.”

The Security Council “resolution’s most notable weakness is its lack of teeth,” they said.

“There’s not a word about holding anyone in Syria accountable for last month’s or he 13 or so other chemical attacks. Assad can breathe easy.”

Throughout months of conflict, he had nothing to do with launching chemical weapons attacks. Insurgents bear full responsibility. Clear evidence proves it. Previous articles explained in detail. Journal editors didn’t.

“The UN deal caps a successful few weeks for the Syrian dictator,” they said.

“He faced down the world’s last superpower. His regime may or may not have to give up its chemical weapons, but he’s bought himself time to continue to use Iranian arms and Hezbollah fighters to defeat the opposition.”

Assad’s no dictator. Syrians support him overwhelmingly. They gave his Ba’ath party members a strong parliamentary majority. They did it democratically. They supported Syria’s new constitution by national referendum.

They won’t get it from Journal and likeminded editors. They feature all propaganda all the time. They omit what’s most important. It’s longstanding scurrilous practice.