European recovery propaganda may be humming (for the latest proof see today’s German ZEW sentiment index which soared from 42.0 to 49.0 matching the all time high in the Dax), but when it comes to the actual economy – that place where commerce is conducted and where supply and demand curves intersect, the situation has never been worse. And not only unemployment which is at a persistently record high for the Eurozone, but actual transactions, in this case in the form of car sales. As AP reports, for the first eight months of the year, passenger car sales in the European Union were off 5.2% to 7.84 million compared with the same period last year, the European Auto Manufacturers’ Association said Tuesday. That’s the lowest January-August figure since the group started keeping track in 1990. So technically, this is a “record” low.

The picture was just as bleak when measuring new car registrations, which in August fell 5% from a year ago to 653,872, the association said.

For those keeping track of the core’s relapse into recession pay attention: the August downturn was distributed across Europe’s biggest markets. Germany saw a 5.5 percent drop, despite a stronger economy than in other members of the 17-county eurozone. Registrations fell 10.5 percent in France, 18.3 percent in Spain, and 6.6 percent in Italy. Ironically, lethargic Britain’s was the only major market to expand, rising 10.5 percent.

Broken down by vehicle type, we got more of the same: luxury doing well, commodity… not so well:

Among the major carmakers, Germany’s Volkswagen Group was off 11.2 percent in August while France’s PSA Peugeot Citroen slid 17.3 percent. Renault Group rose 6.0 percent and General Motors was up 0.5 percent — as a large jump in sales of Chevrolet-branded vehicles made up for a 3.4 percent fall in sales of its main European Opel and Vauxhall brands. Ford was off 1.5 percent.  The biggest market share over the first eight months remained with Volkswagen Group, including the company’s other brands such as Audi, Seat and Skoda, with 24.9 percent, up slightly from 24.8 percent.

The sellside was true to its name, and promptly but the silver lining on the 23 year low print: the collapse is slowing. To wit:

Analyst Carlos Da Silva at IHS Automotive said the figures suggested the market was bottoming out because the decline had slowed from 9.7 percent in the first three months of the year.

“Decline is still on the menu but the rate of descent has nearly been halved,” he said.

Others are not quite as hopeful:

Global auto executives remain cautious, however. They said in interviews at the Frankfurt Auto Show last week that while the European market may have reached the bottom, they do not see any significant increase in demand this year.

Surely, Europe must be kicking itself at this point and asking – what it’s doing wrong. After all, just look at the US:

The European market contrasts with a rebound in the United States, where figures show that sales are on track to reach 16 million vehicles a year — the level from before the recession. European annual sales were 15.6 million in 2007 — but are heading for just under 12 million for all of this year.

The reason for the difference? Total non-revolving credit, i.e., loans for auto purchases (and college degrees of course) most of which are originated by none other than a very generous Uncle Sam . In Europe, this chart is flat if not declining. In the US… well, look at it. 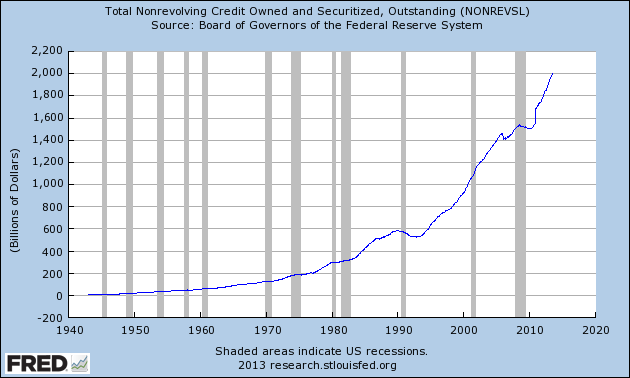