It turns out, though, that there’s more to this breastfeeding story than the mere shock factor. Some of these people who hire the wet nurses are chronically diseased and can’t find sufficient nourishment in all the processed, contaminated foods that now characterize China. The Chinese people are starving for real nutrition and living in a country of unequalled chemical contamination. When real food is hard to come by, it just so happens that human breast milk is Mother Nature’s smoothie. No one can deny that breast milk contains a miraculous assortment of immune-boosting, health-enhancing substances, many of which modern science can’t even begin to understand but which every mom innately knows sustains and nourishes life.

When considered from this perspective — in light of a malnourishment victim seeking the world’s best source for human nutrition — it suddenly seems acceptable… possibly even therapeutic.

It all depends on the intention of the person hiring the wet nurse, of course. If it’s done for entertainment and novelty purposes, it’s weird. If it’s done as a desperate measure for lifesaving nutrition, it’s commendable.

Most people, however, can’t get past the shocking imagery of it. Dr. Tim Stanley of The Telegraph, for example, seems appalled at the idea that adult humans might drink human breast milk. “It’s revolting,” he says. “It’s every bit as wrong as prostitution.”

Yet I’m willing to bet Dr. Stanley drinks bovine breast milk (i.e. “milk”), a beverage that’s far more bizarre because it’s cross-species and nutritionally inferior to human breast milk. If you’re going to drink Mother Nature’s infant formula, it makes far more scientific sense to drink it from your own species and not get it from some hooved, furry creature that weighs four times as much as a human.

The only reason the consumption of human breast milk seems so bizarre to people like Dr. Stanley is because we’ve all gotten used to the far more revolting idea of sucking at the teat of an 800-pound cow. Of course, the dairy industry takes that milk and homogenizes it and pasteurizes it, turning the healthy beverage of raw cow’s milk into a monstrosity of autoimmune disease, digestive disorders, acne and constipation. Pasteurization, it turns out, destroys the fragile lactase enzymes that allow humans to digest lactose. This is why so many people are wildly allergic to pasteurized cow’s milk.

This is part of what I attempted to capture in this CounterThink cartoon I created back in 2006: 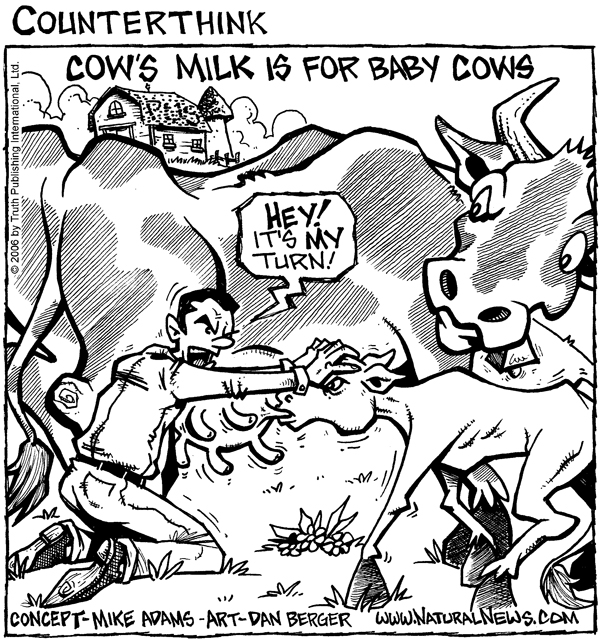 Capitalism gone wild? Or commonsense solution for a sick society?

And I say whoa, hold on there, ‘pardner! Have you taken a look recently at GlaxoSmithKline and the criminality of the pharmaceutical empires that treat everybody on the planet like cattle? Or how about Merck and their HPV vaccines that sacrifice the lives of teenage girls for corporate profits?

Let’s get real about this: The USA is the home of “capitalism without morality!” How else do you get a fast food industry that serves toxic, chemically-altered, nutritionally-depleted foods that cause widespread chronic disease? How else do you get a soda industry whose products cause diabetes and whose refined sweeteners laced with mercury?

By comparison, a woman who accepts honest money to deliver an honest product — human breast milk — is sitting atop a mountain of morality compared to a typical Wall Street bankster who loses other people’s money for profit. What on Earth is immoral about selling Mother Nature’s nutrition to people who need it? Isn’t that actually a pure form of honest capitalism?

You have to give Dr. Stanley some leeway on this issue, however. He’s an historian, not a nutritionist. He may not have considered this topic from the angle I’ve covered here, and I hope he reconsiders his view after seeing this article.

I agree with his view, however, if this breastfeeding is purchased as some weird, twisted form of entertainment. But my understanding is that these arrangements are being pursued by people who are simply seeking nutrition, not entertainment. They sure aren’t going to get that nutrition from Ensure or other canned dead protein vitamin drinks (made mostly from altered milk proteins, sugar and synthetic vitamins). Getting real nutrition directly from the source makes a lot more sense.

Of course, human breast milk is often heavily contaminated with heavy metals, PCBs, pesticides, BPA and a cocktail of other toxic substances due to the environmental exposure of the woman. So if the woman eats a poor diet herself, her breast milk is going to be more of a toxic brew than a nourishing smoothie.

Ideally, a truly capitalist system would recognize a higher value in women who follow cleaner diets and who allow their breast milk to be subjected to heavy metals tests. Those with the cleanest milk would command the highest premiums in a free market exchange with full transparency of the “product” quality. It’s much like paying a premium for certified organic strawberries versus conventional, pesticide-ridden strawberries.

In fact, I believe there should be a free market for human breast milk as long as it’s regulated for basic safety and honesty. But in the United States where nutrition is practically considered criminal, the FDA has outlawed the selling of human breast milk, even to those who really, really need it. That’s the real crime in all this — the denial of access to human nutrition… even for babies who are fed government-subsidized junk infant formula made with corn syrup and soy protein (both of which are GMO).

This is also the core reason behind the FDA’s armed raids on raw milk producers in California and elsewhere. Raw milk farmers have been subjected to armed raids, prison torture, outrageous prosecutions by insane district attorneys, and much more. It seems that people who provide unadulterated, nutritious food to customers are increasingly seen as criminals by the police state government. It is no coincidence that nearly all the government’s health policies promote ongoing chronic disease, pharmaceutical dependence and a lifetime of servitude to a system of “sick care” that doesn’t want people to have access to real nutrition.

I encourage more discussion on this issue

Ultimately, everyone who calls themselves “pro choice” must, by definition, support a woman’s right to voluntarily choose to sell her own breast milk in a free market exchange. It’s her choice, after all, right? And isn’t her milk her property to do with as she pleases?

Coincidentally, that’s also the libertarian angle in all this: since when did the state have any right to tell you what you can and can’t do with your own body fluids? Is not every man or woman free to sell his or her own regenerative body fluids, or hair, or even their own blood to someone else who values it? Don’t blood banks offer money for people who choose to sell their blood for payment? Don’t some women sell their hair to wig companies who make “real hair” wigs for chemotherapy victims?

After all, some women sell their voices as music stars. Other sell their bodies as models. Some sell their brains in exchange for a corporate salary. Why can’t moms who are particularly gifted with breast milk sell that milk to someone who needs it and values it? This sacred right to own and control your own body is fundamental to a free society. If you don’t believe you own your own body (and all its fluids), then you by definition believe in statist slavery.

Dr. Stanley probably agrees with the principle of what I’m explaining here, by the way. And I don’t have any beef with Dr. Tim Stanley. He’s actually a really bright and entertaining writer, and this topic of business men breastfeeding on wet nurses probably caught him off guard. I actually like Dr. Stanley’s writing style, and I laugh out loud at some of his hilarious headlines such as, “North Korea is running out of virgins for Kim Jong-un’s dance troupe. It’s every dictator’s nightmare.” As far as I’m concerned, we need more journalists with the flair of Dr. Stanley, regardless of where they fall on the political spectrum.

I just hope he’ll rethink his position on human breast milk, even for sick adults who are desperately seeking nutritional support. It’s not as weird as it first seems once you consider the science…

For the record, if any of this milk is being taken by adults at the expense of infants and babies, I would be completely against it. In my view, infants and babies should get this nutrition first. Only if there’s excess should adults be next in line.