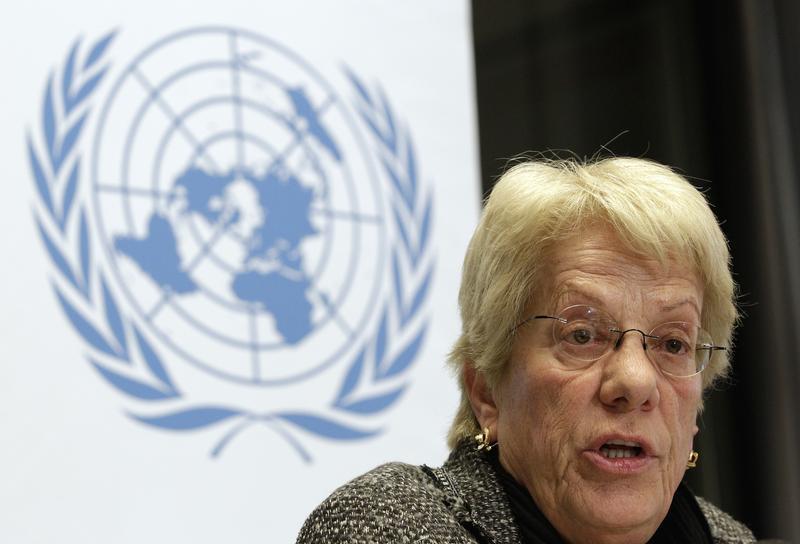 Testimony from victims now strongly suggests it was the rebels, not the Syrian government, that used Sarin Nerve Gas during a recent incident in the revolution-wracked nation, a senior UN diplomat said Monday.

Carla del Ponte, a member of the UN Independent International Commission of Inquiry on Syria, told Swiss TV there were “strong, concrete suspicions but not yet incontrovertible proof,” that rebels seeking to oust Syrian President Bashar al-Assad had used the nerve agent.

But she said her panel had not yet seen any evidence of Syrian government forces using chemical weapons (CW), according to the BBC, she added that more investigation was needed.

Damascus is facing growing Western accusations that its forces used such weapons, which US President Obama has described as crossing a Red Line.

But Ms. del Ponte’s remarks may serve to shift the focus of international concern.

Ms. del Ponte, who in Y 1999 was appointed to head the UN was crimes tribunals for Yugoslavia and Rwanda, has sometimes been a controversial figure.

She was removed from her Rwanda post by the UN Security Council in Y 2003, but she continued as the Chief prosecutor for the Yugoslav tribunal until Y 2008. 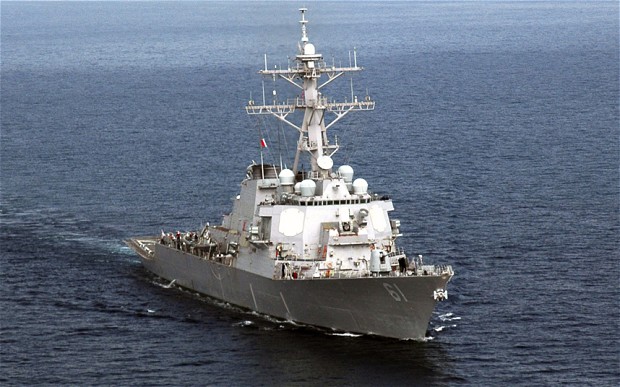 The USS Ramage, one of four U.S. destroyers currently deployed in the Mediterranean Sea equipped with long-range Tomahawk missles that could potentially be used to strike Syria, according to officials

A British and American attack to punish Syria for using chemical weapons will see the two allies launch a barrage of more than 100 missiles in a blitz lasting up to 48 hours, according to military insiders and diplomatic sources.

The border crossing between Syria and Lebanon was frantic on Tuesday, as it had been for many months. But, unusually, amid the hordes of people at passport control on the Lebanese side of the Masnaa crossing were queues of well-heeled Syrians – types not often on the move even well into this third year of war.

Well dressed, with front-of-the-line privileges, for them the crossing was far simpler than for the crowds standing behind.

“Some even use the military lane,” said a Lebanese border guard, referring to the fast “no-questions” route open to VIPs, from either side, and to Hezbollah.

Rumours of an imminent air attack launched by Britain, the US, France and even Turkey is all around the Syrian capital, Damascus, those crossing the border said. So too is a sense that this time, Syria’s foes are not bluffing.

A senior official in the Syrian army warns the West: waging a war on Syria will be reciprocated with an attack on Tel Aviv.

A senior official in the Syrian army warned the United States and its partners on Tuesday that waging a full-scale war on Syria would be reciprocated with an immediate attack on Tel Aviv.

“If Damascus comes under attack, Tel Aviv will be targeted too and a full-scale war against Syria will actually issue a license for attacking Israel,” the Syrian army source told the Iranian Fars news agency.

“Rest assured that if Syria is attacked, Israel will also be set on fire and such an attack will, in turn, engage Syria’s neighbors,” he added.

The source also warned the U.S. and other Western states that if Syria grows weak, certain irresponsible groups will be formed which will endanger Israel’s security.

“Therefore, weakening the central government in Damascus will actually start growing attacks on Israel and will create insecurity for that regime,” he claimed.

“Thus, a U.S. attack on Syria will herald frequent strikes and attacks on Israel, not just by Damascus and its allies in retaliation, but by extremist groups who will find a ground for staging their aspirations,” he concluded.

The comments come amid growing speculations that U.S. President Barack Obama and other Western countries are planning to respond in some form to a deadly chemical attack in Syria last week, which killed hundreds.

Senior U.S. officials told NBC News on Tuesday that the United States may launch strikes against the Syrian regime “as early as Thursday.”

Syrian Foreign Minister Walid Muallem vowed on Tuesday that his country will defend itself in case of any Western military strikes against it.

“We have two options: either to surrender, or to defend ourselves with the means at our disposal. The second choice is the best: we will defend ourselves,” Muallem said in a televised news conference.

Muallem’s warning follows a threat by a top Syrian official if his country was attacked by western states it would react by attacking Israel.

Speaking to an Arabic-language radio station, Syria’s Deputy Information Minister Halaf Al-Maftah said that Israel would face a coalition consisting of Iran, Iraq, Lebanon, and Syria in the event of any attack against Assad. In addition, terrorist groups in Syria and Lebanon would attack Israel with full force, he warned.

Meanwhile, Prime Minister Binyamin Netanyahu warned on Tuesday that Israel will strike back “fiercely” if Syria attacks it.