If Obama was betting on a “rally ’round the flag” effect ahead of the US attack of Syria as a result on an endless chain of false flag-based interventions in the middle east which started with Colin Powell’s lies to the UN, and has never ended, he appears to have completed his latest epic foreign policy blunder and miscalculation. As Reuters reports, Americans strongly oppose U.S. intervention in Syria’s civil war and believe Washington should stay out of the conflict even if reports that Syria’s government used deadly chemicals to attack civilians are confirmed, a Reuters/Ipsos poll says. About 60 percent of Americans surveyed said the United States should not intervene in Syria’s civil war, while just 9 percent thought President Barack Obama should act.

Of course, since the US intervention is fundamentally not about any pretense of humanitarian intervention, and not even about laundering money to the Military Industrial Complex, but all about boosting defense spending and allowing the Fed to monetize more securities when it comes time to untaper, the public opinion is the last thing on Obama’s mind who will do whatever Bernanke’s superiors (i.e., the banker oligarchy) tell him to do.

More Americans would back intervention if it is established that chemical weapons have been used, but even that support has dipped in recent days – just as Syria’s civil war has escalated and the images of hundreds of civilians allegedly killed by chemicals appeared on television screens and the Internet.

The Reuters/Ipsos poll, taken August 19-23, found that 25 percent of Americans would support U.S. intervention if Syrian President Bashar al-Assad’s forces used chemicals to attack civilians, while 46 percent would oppose it. That represented a decline in backing for U.S. action since August 13, when Reuters/Ipsos tracking polls found that 30.2 percent of Americans supported intervention in Syria if chemicals had been used, while 41.6 percent did not.

Taken together, the polls suggest that so far, the growing crisis in Syria, and the emotionally wrenching pictures from an alleged chemical attack in a Damascus suburb this week, may actually be hardening many Americans’ resolve not to get involved in another conflict in the Middle East.

The results – and Reuters/Ipsos polling on the use-of-chemicals question since early June – suggest that if Obama decides to undertake military action against Assad’s regime, he will do so in the face of steady opposition from an American public wary after more than a decade of war in Iraq and Afghanistan….

Obama does not appear to be feeling much pressure over Syria from the American people.

In this week’s Reuters/Ipsos survey of 1,448 people, just 27 percent said they supported his decision to send arms to some Syrian rebels; 47 percent were opposed. The poll has a margin of error of plus or minus 2.9 percentage points for each number.

About 11 percent said Obama should do more to intervene in Syria than sending arms to the rebels, while 89 percent said he should not help the rebels.

Obama is considering a range of options. The most popular option among Americans: not intervening in Syria at all. That option is backed by 37 percent of Americans, according to the poll.

Less popular options include air strikes to help the rebels (supported by 12 percent of Americans); imposing a “no-fly” zone over Syria that would ground Assad’s air force (11 percent); funding a multi-national invasion of Syria (9 percent), and invading Syria with U.S. troops (4 percent). 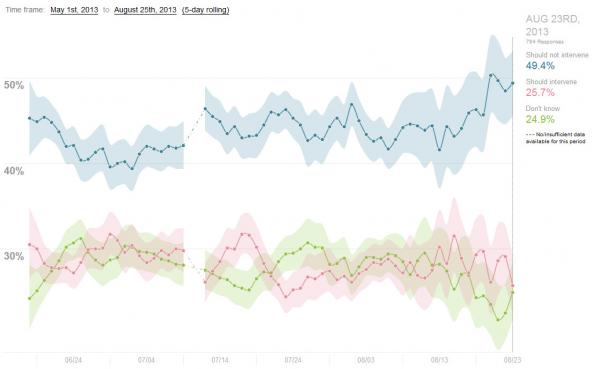